SAN JOSE, Calif. -- Pat Tillman's decision to walk away from
a multimillion-dollar NFL contract to fight for his country made
him a hero to some of the people he used to idolize.

Many celebrities and politicians were among the approximately
3,000 people who came out in his hometown Monday to remember a man
so moved by the Sept. 11, 2001, terrorist attacks that he left the
Arizona Cardinals to join the Army. 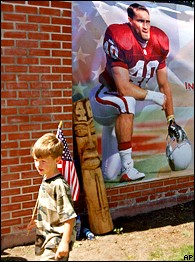 "I was told he admired me but it's the reverse ...," Gov.
Arnold Schwarzenegger wrote in a letter read by his wife, Maria
Shriver. "Pat's journey, that's the American dream and he
sacrificed that. That to me is a real hero."

Tillman, 27, died April 22 in Afghanistan in a firefight near
the Pakistan border as he was leading his team to help comrades
caught in an ambush. The Army gave few details of how Tillman was
killed, but said he was fatally shot while fighting "without
regard for his personal safety."

NFL commissioner Paul Tagliabue and Hall of Famer Gene Upshaw,
executive director of the players' union, were among those who
attended the public memorial at a municipal rose garden.

"The underlying thing was his courage and selflessness on the
athletic field, in his community and now as a soldier," Tagliabue
told reporters before the service.

Last week, the military posthumously promoted Tillman, a member
of the Army's elite Ranger unit since 2002, from specialist to
corporal. He also was awarded a Purple Heart and Silver Star.

"While many of us will be blessed to live a longer life, few of
us will ever live a better one," said Sen. John McCain. R-Ariz.,
who spent 5½ years as a prisoner of war in Vietnam. "He was a most
honorable man."

Tillman attended San Jose's Leland High School and was drafted
by the Cardinals after starring at Arizona State. He became the
Cardinals' starting safety and broke the franchise record for
tackles in 2000.

"It was an honor to coach Pat," former Cardinals assistant
coach Larry Marmie said. "I learned a lot from him. Players often
look for the respect from their coaches. I found myself trying to
earn Pat's respect."

Though he never publicly offered reasons for his decision to
join the Army, several friends have said the terrorist attacks
affected him deeply.

"He wasn't interested in headlines," Upshaw said. "But he was
interested in giving everything for a cause, whatever the cause may
be."

Tillman was assigned to A Company, 2nd Battalion, 75th Ranger
Regiment, and was based in Fort Lewis, Wash.

He was one of about 100 U.S. soldiers to have been killed in
Afghanistan since the United States invaded in 2001. He is the
first NFL player killed in combat since Buffalo offensive tackle
Bob Kalsu died in the Vietnam War. Nineteen NFL players were killed
in World War II.

"I came to pay my respects," said Joel Cascio, a San Jose
resident who served two years in the Navy during the mid-1960s.
"He put his career aside. That's a courageous thing to do, no
matter what walk of life."