The NFL Players Association is expected to file a grievance on behalf of quarterback Quincy Carter, who was unexpectedly released by the Dallas Cowboys on Wednesday amid widespread reports that he failed a drug test.

The Washington Post first reported the story in Friday's editions. 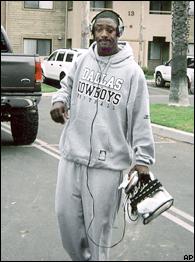 The terms of the collective bargaining agreement between the league and the Players Association prevent a team from releasing a player for a failed test.

Beyond the contentions that the Cowboys might have violated terms of the CBA by releasing Carter because of the failed drug screening, some people close to the quarterback continue to insist it was an illegal test.

Pressed as to whether Carter had ever signed an agreement that permitted the Cowboys to conduct private testing, which is not allowed, one source told ESPN.com: "It's not like he signed anything but, once he found out they were doing it anyway, he basically figured that it was OK. Of course, he was wrong about that."

Some former Cowboys players have also said they suspected the team was conducting private testing on urine or blood samples. But there has been nothing to substantiate those claims and owner Jerry Jones reiterated several times this week that the Cowboys were in compliance with the NFL testing program and did nothing to violate its guidelines.

Carter cleared waivers on Thursday and can sign with any NFL team. He started every game last season, when the Cowboys won 10 games and made the playoffs in Bill Parcells' first year as coach. Just days before Carter was released, Parcells said Carter had a leg up on his competition to be Dallas' No. 1 quarterback.

With Carter's having cleared waivers, the team that might add him now knows that he has failed two drug tests and that the next misstep would result in a four-game suspension (ESPN.com's Len Pasquarelli has confirmed that Carter spent time at a drug rehabilitation facility within the past 18 months). League sources said Minnesota Vikings officials have discussed internally the possibility of signing Carter, but have cooled a bit on the idea.

The Dallas Morning News reported that about 10 teams, including Arizona and Detroit, have inquired about signing Carter.

"The last few days have been full of mixed emotions because I want to play and be in someone's camp so bad," Carter told the Morning News. "But I have to just sit here, see who's interested in me and play the waiting game."

League sources told ESPN.com that despite the positive test, Carter is not under suspension by the league.

The team remained vague Thursday about the reasons for Carter's release. Jones again refused to specifically address the reports, and Parcells said he was focused on a future that includes 40-year-old Vinny Testaverde at the top of the quarterback depth chart.

"I'm not going to talk about this subject anymore. It's not worth it, doesn't really mean anything now," Parcells said. "I want to go where I know I've got to go now."

It was unclear what recourse the Players Association could seek. It's unlikely the union would want Carter on the roster of a team that doesn't want him, but it perhaps could seek compensation from an arbitrator. The union would have to prove Carter was released because of a failed drug test.

Information from ESPN.com NFL senior writer Len Pasquarelli and The Associated Press was used in this report.