CANTON, Ohio -- John Elway surveyed the sea of Broncos blue
and orange, heard the cheers, and offered his fans a tribute.

"To all the Broncos fans out there, thank you for everything,"
Elway said Sunday, when he was inducted into the Pro Football Hall
of Fame. "And a final Mile High Salute is for every one of you out
there." 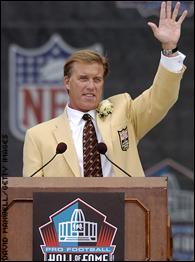 And there were thousands of them at Fawcett Field to watch
Elway, Barry Sanders, Carl Eller and Bob Brown bring the Hall
membership to 225. Denver is about 1,100 miles from Canton, but
that hardly deterred Broncos fans from making the journey and
donning their No. 7 jerseys.

Elway is the first Bronco inducted, and the fans chanted his
name, cheered every time he was shown on the scoreboard, then
listened intently as Elway's daughter, Jessica, 18, told them how
her father taught his children to be tough.

Then Elway took the stage for what seemed like a Broncos home
game.

"I have to be totally honest, I have never heard that in Ohio
before," he joked at the beginning of an emotional speech in which
he paid tribute to his late father, Jack, his first coach, and the
rest of his family; to his city; to his team; and to his teammates.

"For every guy who ever stepped on the field with me, I accept
this honor today on behalf of all of you," Elway said. "Thanks
for protecting me, catching my passes, defending our goal line,
sharing our highs and lows. And thanks for not losing confidence in
me when I lined up for a snap as a rookie behind the left guard."

When he retired after guiding Denver to its second straight NFL
title -- and his fifth Super Bowl appearance -- he had led his team
to more victories (148) than any quarterback in history. The
resourceful Elway engineered 47 game-winning or tying drives in the
fourth quarter or overtime. He threw for 51,407 yards, more than 30
miles, and 300 touchdowns.

He was humbled by the company he was keeping, too.

Both Elway and Sanders made a mockery of defenses throughout
their record-setting careers, while Brown was one of the premier
blockers of his era. Eller was a star defensive end with the Purple
People Eaters in Minnesota.

"I'll call him the best ever to play the game," Elway said of
Sanders. "I wish I could have played with Bob Brown, and I am glad
I didn't have to play against Carl Eller."

Sanders rushed for more than 1,000 yards in all 10 of his
seasons with the Detroit Lions. But at 31, he walked away from the
game in 1999 and, Sunday, became the third-youngest Hall of Fame
inductee, behind Gale Sayers and Jim Brown.

Known for his unfathomable moves that led to long, darting runs,
Sanders said his one regret about leaving the game so early was not
playing in a Super Bowl. The Lions reached the NFC title game in
1991, but that was as far as Sanders got.

Introduced by his father, William, as "the third-best running
back who ever lived," Sanders credited his dad for "the great
lesson that allowed [me] to be a great player."

"He said, 'Son, play the game the way it is supposed to be
played,' " Sanders recalled. " 'Don't be afraid to make mistakes.
Go out and play the way you are capable of.' "

Eller retired in 1979 after 16 NFL seasons. A five-time All-Pro
who played in six Pro Bowls and four Super Bowls, he made a habit
of recovering fumbles, grabbing 23 in his career.

Eller, an admitted former substance abuser who became a drug
counselor in Minneapolis, stressed the importance of education and
of serving as a role model in his strong speech.

"I want to use this platform to help young African-American
males to participate fully in this society," he said. "I want
their direction to be headed to the great universities of our
nation, not to the prison and jail cells. They must know they are
part of the establishment, not separate from it.

Brown, a native of nearby Cleveland, made five All-Pro teams and
six Pro Bowls playing for the Eagles, Rams and Raiders. A ferocious
run blocker and pass protector, Brown was nicknamed "Boomer" for
his hits.

"I brought the need to be the best [and] an uncompromising work
ethic," he said. "I'm proud and privileged to have my name
mentioned with such offensive linemen as Art Shell, Gene Upshaw,
Jim Otto and Ron Mix. Better has not been born yet."

Then turning to the other Hall members, he added: "I am
thrilled and eager to embrace you, my band of brothers."