BEREA, Ohio -- Kellen Winslow Jr. was uncharacteristically
humble after his first practice with the Cleveland Browns.

The rookie tight end, looking exhausted one day after a round of
late-night negotiations resulted in a contract, acknowledged that
he has a lot of catching up to do after a 12-day holdout. 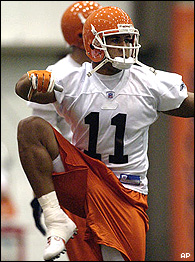 Winslow, who has called himself "The Chosen One" and said he
expects to surpass his father's Hall of Fame career, signed a
six-year contract Wednesday that makes him the highest-paid tight
end in NFL history.

The contract is worth $29 million and could bring him up to $40 million if he reaches all his incentives. The deal includes $16.5 million in combined signing and option bonuses.

"It feels great, like I won the lottery," Winslow said.

His contract exceeds the $31 million deal Kansas City's Tony Gonzalez signed in 2002. That package included a $10 million
signing bonus, which was the most ever for a tight end.

"I just wanted to get my fair-market value. I was the sixth
pick, but I was in an elite group," Winslow said.

The Browns and Winslow's agent, Kevin Poston, were reportedly
$12 million to $22 million apart, with Poston seeking a contract similar to the six-year, $54.6 million deal that wideout Charles Rogers received last year from Detroit.

With his father, Kellen Winslow Sr., and Poston looking on, Winslow Jr. caught two touchdown passes during practice
with the Browns' second and third teams Wednesday morning. Winslow
said he was rusty.

He also said Poston could tell he was getting frustrated with
the contract talks, particularly after watching Monday night's Hall
of Fame game.

Browns coach Butch Davis said he needs to evaluate where Winslow
is physically before deciding whether he will play in the team's
opening preseason game Saturday at Tennessee.

"It's good to have him back out there. He looked like he had
fresh legs," Davis quipped.

Winslow's teammates welcomed the 21-year-old to camp and said
there would be no grudges because of the holdout. He won't get any
special treatment, either, because of his name or big contract.

"All rookies get treated like peasants around here," defensive
lineman Kenard Lang said.

Quarterback Jeff Garcia, who publicly told Winslow to put his
teammates before his salary, said there were no hard feelings
between the two.

Winslow said he was glad Garcia urged him to get to camp.

"Obviously, Jeff is a leader and he wants to win. I felt the
same way, but I just wanted to get a fair-market deal," he said.

The 6-foot-4, 250-pound Winslow is expected to open up the
Browns' offense, with his combination of size and speed creating
mismatches against linebackers and defensive backs.

The Browns sacrificed a second-round pick, trading with Detroit
to move up one spot in April's draft, to select the former Miami
star with the sixth selection.

Lang, another Miami product, says Winslow is the latest in a
long line of outstanding Hurricane tight ends.

"From Bubba Franks, to [Jeremy] Shockey, to him. He's the next
great one. He has to earn it. I believe he will," Lang said.

Information from The Associated Press and ESPN.com senior writer Len Pasquarelli was used in this report.