PITTSBURGH -- For the Pittsburgh Steelers, the future is now.

"I've got to be the leader now," Roethlisberger said.

Maddox was injured in the third quarter of Sunday's 30-13 loss after getting hit by cornerback Gary Baxter.

"Tommy had the MRI and right now it looks like he has a
non-surgical injury to his elbow," Steelers coach Bill Cowher
said Monday. "He will not be able to throw for six weeks and
then at that point he will be able to start throwing and we will
see where he is."

Maddox plans to seek a second opinion from elbow injury
specialist Dr. James Andrews, an orthopedic surgeon in Birmingham,
Ala. Unless Andrews' diagnosis differs from those of the team
doctors, Maddox will not throw or practice for six weeks but could
resume playing sometime in November.

"It's the best-case scenario," Cowher said. 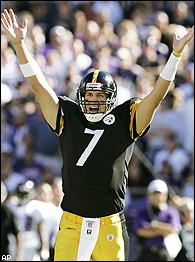 Roethlisberger replaced Maddox on Sunday and completed 12-of-20 passes for 176 yards, two touchdowns and two interceptions. One of his interceptions was returned for a touchdown.

Co-captain Alan Faneca sounded less than thrilled when he discussed the prospect of a rookie leading the charge against the Dolphins.

"Exciting?" Faneca replied to a question with disbelief in his voice, the Pittsburgh Post-Gazette reported. "No, it's not exciting. Do you want to go work with some little young kid who's just out of college?

"It's a learning process for him. He's a No. 1 pick, he's fresh out of college and that's the big thing. He's throwing in a new offense. ... He has to learn that, too, so there's a lot to soak in. It's like every play you get better, you see things, you start to realize things, how a play works, how defenses react to it. It's just a process."

Maddox was expected to start all season so the Steelers could slowly bring along Roethlisberger, the No. 11 overall draft pick and only Steelers quarterback drafted in the first round since 1981.

Maddox's injury changes all that. Starting Sunday at Miami means Roethlisberger will face one of the NFL's better defenses; also, any veteran quarterback brought in this week likely wouldn't have enough time to learn the Steelers' system.

Roethlisberger needn't take Faneca's skepticism personally. The veteran made it clear that the learning curve applies to "any rookie coming into the league," including himself. Faneca, who is 27, told the Post-Gazette he remembers seeing things, learning, feeling more comfortable and getting better -- over time.

Somewhat more optimistic, receiver Hines Ward told Post-Gazette he's sure the youngster will make the most of his early opportunity.

With Maddox expected to miss at least five games and possibly
more, the Steelers were expected to bring in a veteran quarterback to back up
Roethlisberger and Brian St. Pierre, a former Boston College player
who has never played in an NFL game.

Rather than picking up an established backup, however, the team has signed veteran Mike Quinn and put him on the practice squad, ESPN.com senior NFL writer John Clayton has learned. The Steelers were able to assign 30-year-old Quinn to the practice squad because he has played in only five games and hadn't been on an active roster for longer than nine weeks.

Jeff George, who has been virtually blacklisted and last played in a game early in the 2001 season, expressed interest in the opening Monday, Clayton reported.

The last time Pittsburgh started a rookie at quarterback was 1986 -- when Bubby Brister lost his only two starts -- according to the Post-Gazette. The Steelers used a rookie in relief more recently: Antwaan Randle El in 2002.

The injury is yet another setback for 33-year-old Maddox, a
Broncos' first-round draft pick in 1992 who hadn't started an NFL
game in 10 years until beating out former Steelers starter Kordell
Stewart early in the 2002 season.

Maddox was chosen as the NFL Comeback Player of the Year that
season, despite missing two games after a scary injury in Tennessee
left him temporarily paralyzed on the field. Until now, those were
the only games he missed because of an injury with Pittsburgh.

"Obviously, he is very disappointed," Cowher said. "He has
been dealt a lot of adversity in his career and life and he is a
pretty resilient guy."

Information from SportsTicker and The Associated Press was used in this report.