NEW YORK -- Ed Reed wasn't just the best defensive player on
the Baltimore Ravens, which is no small feat with Ray Lewis as a teammate. This season, Reed was the best defender in the NFL.

The Ravens safety outplayed even his illustrious buddy and
training partner in winning The Associated Press 2004 Defensive
Player of the Year award. No one was more impressed than Lewis.

"He deserves it," said the two-time winner of the honor. "He
prepares like a coach. He loves to play, period. He brings joy to
work. He's tough and smart."

Reed showed just how tough, smart, resourceful and skilled he is
by dominating games from the safety position. Usually, it's
linebackers such as Lewis or ends who get lots of sacks or
cornerbacks who shut down opponents who control games.

But Reed, in his third season out of the University of Miami --
also Lewis' college -- had a greater impact than any other defender.
He earned 20 votes from a national panel of writers and
broadcasters who cover pro football, beating Steelers linebacker
James Farrior, who had 16.

He is the first safety to win the award in 20 years.

"A lot of great players have truly achieved this award and I'm
just in my third year," said Reed, who led the NFL with nine
interceptions and set an NFL mark with 358 return yards on those
picks."I love football. I just want to have fun with it, and
whatever else comes with it, comes with it."

Although the Ravens (9-7) fell short of the playoffs, no one
could blame Reed. He was dynamic every week, and his 106-yard
interception return against Cleveland, another NFL record, was
among the most memorable plays this season.

Reed grabbed a deflection off the hands of tight end Aaron Shea
deep in the end zone and rather than take a knee, he sped down the
right sideline for the score.

"It's really just exciting for me to go out and play the game,
to get up on another Sunday and have the same kind of fun you've
been having since you were a kid," Reed said. "That's just me.
It's really just me enjoying the game for what it is. To know that
I can make a play, or maybe even win the game, that's exciting to
me." 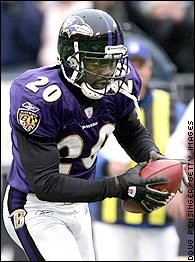 And to everyone else in Baltimore. Particularly Lewis.

Farrior had a career season, making his first All-Pro team --
joining Reed and Lewis on it -- and helping Pittsburgh lead the
league with a 15-1 record, a franchise best. He was trailed in the
balloting by Indianapolis end Dwight Freeney, the NFL sacks leader
with 16, who got seven votes.

Carolina end Julius Peppers received three votes. Lewis, the
2000 and 2003 Defensive Player of the Year, got one vote. So did
San Diego linebacker Donnie Edwards.

Kenny Easley of Seattle was the last safety to take the award,
in 1984.

Deion Sanders, the 1994 winner, said Reed's winning"shouldn't
even be a question."

"I played with Tim McDonald, a Pro Bowler, Mert Hanks,
tremendous safety, Darren Woodson, and none of them compare with Ed
Reed," Sanders said."The guy's tremendous, by far. He should win
the Player of the Year. What else does he have to do?"