NEW YORK -- New York Jets offensive coordinator Paul Hackett knew the
time had come for him to leave the team. 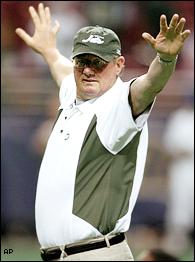 Facing mounting pressure and constant criticism for his
conservative play-calling, Hackett and coach Herman Edwards decided
it was best for them to part ways. So Hackett resigned Wednesday
after four seasons with the club, and Titans offensive coordinator Mike Heimerdinger was hired hours later as his replacement.

Hackett's departure was expected after the Jets' 20-17 overtime
loss to Pittsburgh in the second round of the playoffs Saturday.

"It's good for the program that we're headed in a different
direction," Edwards said on a conference call.

The Jets showed little imagination in their version of the West
Coast offense, ranking 17th in the NFL in scoring this season even
though Curtis Martin led the league in rushing with 1,697 yards.

Chad Pennington threw for 2,673 yards and only 16 touchdowns,
while the Jets ranked 22nd in passing yards and managed 51 points
in the first quarter during the regular season.

Once Pennington returned from a strained right rotator cuff in
December, Hackett went even more conservative. The tight ends were
virtually invisible in the offense, and playmaker Santana Moss was
hardly used after a breakout 1,000-yard season.

Perhaps most upsetting to team officials was the lack of
offensive scoring in four games against Pittsburgh and New England,
where they managed a total of two touchdowns.

"The biggest negative is not being able to score enough points
in those games," general manager Terry Bradway said Tuesday. "You
can go back, and find out that there were probably a bunch of plays
that were left on the field."

Even when Hackett tried to mix things up, it failed. One play
that will be remembered from the regular season is LaMont Jordan's
pass with the Jets leading the Ravens 14-0 late in the first half.
Ed Reed intercepted in the end zone, Baltimore gained momentum and
eventually won 20-17 in overtime.

Hackett started losing his supporters midway through the season. Edwards never gave his longtime friend a ringing endorsement, while
Pennington would only say that he supported any decision Edwards
made on the coordinator's future.

"I leave knowing that I've worked extremely hard and had a hand in the
organization's recent success," Hackett said in a statement. "We've enjoyed some wonderful moments."

Hackett joined the Jets after serving as head coach at Southern
California from 1998 to 2000. He was also head coach at Pittsburgh
before taking over as offensive coordinator/quarterbacks coach in
Kansas City from 1993 to 1997.

"It's gone faster than I thought it would," said Heimerdinger,
who signed a three-year deal. "It's the fastest of anything that's
happened to me. I'm still kind of spinning."

Edwards wants more scoring, and he is sure to get it with
Heimerdinger. The Titans had one of their best offensive seasons in
2003 when Steve McNair was co-MVP of the league. Tennessee scored
its most points (435) since 1961, and posted a franchise record
with six straight games scoring 30 or more points -- only the third
NFL team to accomplish such a streak since 1970.

Even though the Titans struggled with injuries in 2004 -- McNair missed much of the season -- the offense ranked 11th in the NFL.

"I've watched him coordinate, I've watched their offense. It's
always intriguing to me," Edwards said. "He was the first call we
made."

"That gave us a head start in the process. We will be looking
for someone who will allow us to maintain and improve our offensive
philosophy," Fisher said.