With a pending court case involving the NFL retirement plan and Mike Webster, ESPN.com explores the life and tragic death of the former Steelers center. First in a five-part series:

Mike Webster never made it to his son's 10th birthday party in Lodi, Wis. Lying in a dark room at the Budgetel Inn, some 20 minutes away in Madison, he was bed-bound in a haze of pain and narcotics, a bucket of vomit by his side. 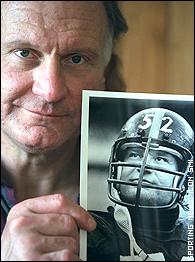 Webster was often laced with a varying, numbing cocktail of medications: Ritalin or Dexedrine to keep him calm. Paxil to ease anxiety. Prozac to ward off depression. Klonopin to prevent seizures. Vicodin or Ultram or Darvocet or Lorcet, in various combinations, to subdue the general ache. And Eldepryl, commonly prescribed to patients who suffer from Parkinson's disease.

After 17 seasons in the National Football League, Webster had lost any semblance of control over his once-invincible body. His brain showed signs of dementia. His head throbbed constantly. He suffered from significant hearing loss. Three lumbar vertebrae and two cervical vertebrae ached from frayed and herniated discs. A chronically damaged right heel caused him to limp. His right shoulder was sore from a torn rotator cuff. His right elbow grew stiff from once being dislocated. His knees, the cartilage in them all but gone, creaked from years of bone grinding against bone. His knuckles were scarred and swollen. His fingers bent gruesomely wayward.

"He was too sick to come to my birthday party. He didn't even call me and I was mad," Garrett Webster remembered recently. "Now, I understand that there was something wrong."

Ten years later, there is only a faint strain of resentment in his voice. His father, the celebrated Hall of Fame center for the Pittsburgh Steelers, is gone now. Still, the mental snapshots, those harrowing memories, persist of the stoic man they called Iron Mike:

When Webster died in Pittsburgh on Sept, 24, 2002, at the age of 50, the official cause was heart failure. That was absurd, of course. Few players showed more heart than Webster in his marvelous 17-year NFL career. In the end, his body and brain left him a defeated man.

Webster's Steelers won four Super Bowls in six seasons from 1974-79 and rank as one of the league's greatest teams. There has been a football renaissance in Pittsburgh, where this year's Steelers finished the regular season with only one loss and reached the AFC championship game. They won't be going to Jacksonville, but with quarterback Ben Roethlisberger no longer a rookie, running back Jerome "The Bus" Bettis contemplating another season and the core of a savage defense back, square-jawed Bill Cowher may be coaching his team in Detroit this time next year.

Nine players from the Steelers' 1970s dynasty are enshrined in the Pro Football Hall of Fame. Eight of them -- Terry Bradshaw, Franco Harris, Jack Lambert, Joe Greene, Jack Ham, Mel Blount, Lynn Swann and John Stallworth -- reveled in the franchise's return to glory. Their missing comrade is a footnote worth considering. Amid the fervor and fanaticism that enveloped the Steel City this season is Webster's reminder of the daunting price the game can sometimes extract.

Sometime later this year a collision is likely to occur in a Baltimore courtroom. Civil Action No. WDQ-04-cv-1606, the Estate of Michael L. Webster v. The Bert Bell/Pete Rozelle NFL Player Retirement Plan and The NFL Player Supplemental Disability Plan, is working its way through Maryland's U.S. District Court.

The NFL already has paid Webster and his estate more than $600,000 -- $100,020 annually for the last three years of his life, plus a $309,230 retroactive payment made in December to cover his disability from 1996-99. Webster's surviving family -- ex-wife Pamela, 53, and four children, Brooke, 27; Colin, 25; Garrett, 20; and Hillary, 16 -- wants more. A lawsuit directed by Jani, the administrator of Webster's estate, seeks an additional $1.142 million in disability payments, plus legal fees and expenses, going back to his retirement after the 1990 season. The suit argues that Webster was mentally disabled when he left the game and that by denying Webster "active football" disability the NFL's pension board committed an "abuse of discretion."

"This isn't a knee that became inflamed after an old injury -- this is about Mike Webster's brain," said Cyril Smith, co-counsel for the plaintiffs. "He was hit in the head thousands of times and suffered many concussions at a time when the dangers weren't widely recognized. The evidence is clear that he was completely disabled by March of 1991."

As evidence of Webster's diminished cognitive command from 1991-96, the family cites the loss of assets over a period of several years that once amounted to an estimated $2 million to $3 million or more.

"Are you telling me that 17 seasons in the NFL didn't factor into his bad business decisions?" Garrett Webster said. "World-famous athletes, at the end of their careers, people say you're stupid and lazy. But that's what football does to you."

The NFL contends there is no empirical evidence that Webster was disabled before 1996, noting that no doctor who assessed Webster in the original case saw him until after 1996. Regarding his competence, the NFL points to the same business dealings referred to by the estate.

"It's a very sad case," said Doug Ell, the lead attorney for the NFL retirement plan. "He was a great, great player. He tried to run all these businesses, all these companies and, ultimately, it's not clear that any of them succeeded. The Board can't say a guy is permanently disabled just because his businesses failed."

This much is certain: Webster's life and career were, in so many ways, a worst-case scenario for physical and emotional well-being. With a family history of mental illness and heart disease, Webster played a compromising position in an exceedingly violent game for an extended period of time. He competed in an era when the rules governing contact were far more liberal than they are today and the development of safer equipment, particularly helmets, was embryonic. Webster's toughness, a quality that compelled him to play in 177 consecutive games, exacerbated his injuries, just as experimentation with anabolic steroids might have led to later liver, kidney and heart ailments. His immense pride worked powerfully against him; in a city noted for the exquisite steel bridges that span its three rivers, Webster resisted when friends and former teammates reached out to help.

Some people will see the suit as a referendum on the NFL and its treatment of former players who are irreparably injured in their service to the league. Others view the case as a transparent, after-the-fact money grab.

"The kids deserve it," Jani said, "because of what their dad went through. They basically sacrificed their father to this game. If somebody told them, 'We'll take care of your dad [but] we gave him a spaghetti brain and we'll give you a million dollars.' They would say, 'No, thanks. I'd rather have my dad.' "

This is one of the few things all four children agree on.

"Mike's story needs to be told," Pam Webster said from her home in Lodi, where she lives with three of her four children. "I don't want this man to die in vain.

"They're gladiators. When the game is over, these guys have to go home. And when it's over, a lot of them don't have a home to go to."