With a pending court case involving the NFL retirement plan and Mike Webster, ESPN.com explores the life and tragic death of the former Steelers center. Second in a five-part series:

Merv Corning, the Southern California portrait artist, has been commissioned by the NFL to paint more than 300 portraits since 1967. None is more haunting, particularly in retrospect, than his vision of Mike Webster. 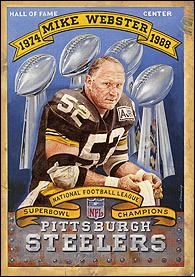 Flanked by four gleaming Super Bowl trophies, Webster sits on the bench, his gnarled hands holding a towel. His thin blond hair, white at the temples, matted with sweat. Deep-set brown eyes, too small for his large, round and nobly scarred face, engage with jarring intensity. His black and gold jersey, grass-stained and bloody, a splattering on the bridge of his misshapen Roman nose for effect.

"He hated it," said Webster's oldest son, Colin, who lives just north of Pittsburgh. "He said, 'Every time they paint me, they put blood all over me. Why do they have to do that?' "

Somehow, blood and the implied guts seemed appropriate. It was the way he played the game.

Webster was born on March 18, 1952 in Tomahawk, Wis., a swashbuckling address of origin fit for a man who cut a swath as wide as his hero, John Wayne. He was an All-Big Ten center at the University of Wisconsin, but at 6-foot-2, 225 pounds, there were questions about his relatively spare frame in the NFL. He was drafted in the fifth round of the 1974 draft by the Pittsburgh Steelers -- Lynn Swann, Jack Lambert and John Stallworth were taken ahead of him, giving the Steelers four future Hall of Famers among their first five picks -- and his manic work ethic amazed his coaching staff and teammates alike. 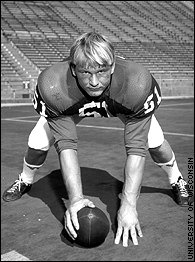 It was a discipline born of insecurity. Webster did not consider himself a great athlete, but believed he had to work harder than most players. His self-esteem was sadly but not inexplicably lacking, for he came from an alarmingly dysfunctional family. His father was an overbearing disciplinarian, and one doctor noted that Webster grew up with "episodes of marked physical abuse." His parents, both described by Webster as alcoholics, divorced when he was 10, and the family house burned down a year later. His younger brother, Joseph, spent more than a dozen years in prison for a sex-related offense.

So Webster hit the weights hard and in a few years he had packed another 35 pounds of muscle. Webster also began to display the effects of anabolic steroids -- which had yet to be banned by the NFL -- including the acne, the radical mood swings, the thinning hair. Later, he would matter-of-factly tell a physician, Charles Cobb, that he had experimented with steroids in his 20s. He and teammates Jon Kolb, Steve Courson and Steve Furness were the core of a group that slammed the iron with abandon in the basement of the Red Bull Inn in nearby McMurray. Although Webster publicly denied it, steroid references can be found several times in his voluminous medical records.

"And if I did," he would tell friends, "it was legal back then."

In the days before today's form of free agency, even future Hall of Famers had to put in their time on the bench. Webster played behind Ray Mansfield for two seasons before becoming a regular in 1976. He started 14 games, six at guard and eight at center, and went on to start at center for each game of the next nine seasons. Going back to his rookie season, Webster played in a remarkable 177 consecutive games despite a variety of injuries that would have taken less committed players out of the lineup. Only a dislocated elbow ended the streak in 1986. He was ruthlessly diligent; how many NFL players had a blocking sled in their front yard?

The position of center requires, above all, intelligence; remembering the snap count is the least of the position's worries. The center assesses the defense and calls out the blocking assignments. Steelers quarterback Terry Bradshaw admitted at Webster's 1997 enshrinement at the Pro Football Hall of Fame that his center called as many plays at the line of scrimmage as he did. Webster, a devoted student of film before it was fashionable, sometimes based his calls on the subtle positioning of defenders' feet or shoulders. Line play is a function of leverage and Webster, as head coach Chuck Noll said on many occasions, was almost technically perfect. He played with precision that belied his monstrous biceps -- set off by trademark short sleeves -- and a barely controlled fury.

"I can see him now, sprinting out of the huddle to the line of scrimmage before everyone else," said Harry Carson, the former New York Giants linebacker, sitting in his home in leafy Bergen County, N.J. "To me, that's what it was all about. He'd come out so pumped up, you'd get pumped up right along with him. I looked at Mike as being the leader of that group -- everything revolved around him."

Webster, the veritable epicenter of one of history's great teams, played in Pittsburgh for 15 seasons and appeared in 220 games, still franchise records. Including two seasons in Kansas City, 1989 and 1990, Webster played in 245 career games, the most ever by a center at the time of his retirement. Offensive linemen generate few statistics, but consider this: Webster was voted to nine Pro Bowls. When he entered the Hall of Fame, it was the highest total ever for an offensive lineman and second only to Bob Lilly's league-record 11. In 1994, Webster was named to the NFL's 75th anniversary team, a group more elite than those with brass busts in Canton. The Steelers, meanwhile, won four Super Bowls in a span of six seasons. Webster was a captain of three of those championship teams.

Those honors, however, came with a caveat, as Webster came to realize in his later seasons. There would be a necessary physical price to pay for his longevity; mental toughness would congeal into physical frailty. Because of his place in history, Webster was particularly vulnerable. The savage head-slap, as practiced by Deacon Jones and others, officially had been outlawed by then, but that didn't stop defensive linemen from using the maneuver in the '70s and '80s. Helmets, thin plastic shells by today's enlightened standards, did little to absorb the shock. And, because his hands were occupied when snapping the ball, Webster sometimes had a difficult time warding off those initial hits.

When he was finished, Webster had broken most of his fingers, suffered permanent damage to five vertebrae, and effectively ruined his knees, right shoulder and right heel. More troubling were the constant headaches that began to dog him in his last few seasons with the Steelers. The record books dutifully note his 245 regular-season games, but there were nearly 100 more, taking his 19 playoff games and more than 75 preseason games into account. Factor in the grueling training camps in Latrobe, Pa., and practices throughout the season, and it's probable that Webster endured more than 25,000 violent collisions.

Webster's oldest son, Colin, tells the story of the doctor, who, upon examining an MRI of Webster's, asked if he had been in a car accident.

Despite this, Webster was never treated by team doctors for a concussion, according to medical records submitted in the case. The Steelers' trainers, too, note he never complained of concussion symptoms. Still, it is probable, based on discussions with doctors and former players, that Webster suffered a significant number of head injuries during his career that today would be classified as concussions.

"Pacino tells Woods to stop worrying so much about injuries," Garrett said. "He tells him, 'You cannot take away an athlete's confidence in his body. When you take that away, you steal his heart.'

"There was an unwritten rule in the NFL -- if you can play, under any circumstances, you play."

Webster played through the pain and, almost certainly, through the debilitating effects of post-concussion syndrome, the same condition that hastened the retirement of Carson in 1988, New York Jets wide receiver Al Toon in 1992 and former Steelers running back Merril Hoge in 1994. Today, NFL doctors will tell you, there still is much they do not understand about the effects of brain trauma. In the '80s, they knew next to nothing.

The Steelers and Giants met 13 times in preseason and regular-season games when Webster and Carson played. Carson, a middle linebacker, locked up with Webster many times.

"I was one of the hardest hitters in the league," Carson said. "I was willing to stick it up in there and deliver a massive shot to the head with my forearm. I can't tell you how many times I did that to Mike. When he passed away, I was saddened. I thought perhaps what I did might have contributed to the neurological problems that he had. But Mike would not blame me. That's just the way it was.

"I got post-concussion syndrome, too," Carson said. "I got mine. It's an occupational hazard that's part of the game."

Pam Webster, contemplating the hindsight of an 18-year marriage that began on a blind date in college and ended six months before Webster's death, said there were signs that something was wrong in the mid-1980s, a good five seasons before the end of his career.

"Small things," she said. "Anger at inappropriate times, a sense of disorganization, personality changes with no warning, getting lost, getting easily distracted. He poured his heart and his soul into the game of football, but ... "

But he was slowly, literally, losing his mind.