With a pending court case involving the NFL retirement plan and Mike Webster, ESPN.com explores the life and tragic death of the former Steelers center. Fifth in a five-part series:

There was a time, around the turn of the 20th century, when Pittsburgh was known as "The Forge of America." But by the early 1980s, just a few years after the Steelers won their fourth Super Bowl, Andrew Carnegie's dynamic creation had foundered. More than 100,000 steel-related jobs left the city and now information technology is the leading industry.

The ex-wife and four children of late Steelers star Mike Webster are looking for about $1 million of that money sitting in downtown Pittsburgh. They are suing the NFL retirement plans in Maryland's U.S. District Court -- the plans are based in Baltimore -- claiming that Webster was completely disabled when he retired after the 1990 season.

"I think we have a good chance," said Colin Webster, the oldest of Webster's two sons, who lives outside Pittsburgh. "Basically, his whole life was ruined as a direct result of what these people did."

In the fall of 2002, a day after he had watched his son Garrett play a game for Moon Area High School, Webster was rushed to Sewickley Valley Hospital. His lips were a dangerous shade of green and he was nauseous; he had been sniffing ammonia because he was convinced that if he fell asleep he might not wake up. Two days later, early on the morning of Sept. 24, surrounded by his family, Webster died at Allegheny General Hospital. If the coroner was a Steelers fan, he might have noted that the time of death, 12:52, linked quarterback Terry Bradshaw (No. 12) and his favorite center (No. 52) one last time. A heart attack was blamed -- an earlier angioplasty failed to correct the damage -- but there was also extensive liver and kidney damage.

Later that morning Webster's caretaker, Sunny Jani, called the Steelers with the news. Joe Gordon of the Steelers met him an hour later at the Joseph M. Somma Funeral Home in Robinson. They picked out a simple casket, the Westridge model. The entire bill was $6,861.50, but Steelers owner Dan Rooney covered most of it with a check for $5,000.

Two years after the grim fact, Jani sighed and a smile played on his face.

"If Mike found out Mr. Rooney paid for the funeral," Jani said, "he would have been really upset."

The day of the funeral was mild and drizzly but, not surprisingly, so many who were there say it was chillingly cold. More than 200 mourners gathered at the hilltop funeral home to pay their final respects. Bradshaw, Franco Harris, Lynn Swann, Dan Rooney and Chuck Noll were among those who attended the 80-minute service, along with former Giants player Harry Carson and ex-Packers linebacker Dave Robinson.

"We should never allow the passing of a loved one to be the drawing card to keep our family together," Bradshaw said.

The Rev. Hollis Haff remembered Webster's joy in quoting lines from John Wayne's character Rooster Cogburn in "True Grit." For Webster was, in so many ways, football's version of the cantankerous, one-eyed marshal. He played for 17 seasons in the NFL and, also taking his playoff and preseason games into account, his career total was nearly 350 games. Webster used to joke that he had played the equivalent of seven football players' careers.

When Webster died, former Steelers running back Merril Hoge felt a deep twinge of sadness -- and fear. Hoge played with the Steelers from 1987-93, overlapping two seasons with Webster. His career ended in 1994 with the Chicago Bears after he suffered his second concussion of the season.

The trauma had a serious effect on his brain. Early on, Hoge carried his own telephone number in his wallet. Sometimes he got lost walking around his neighborhood. It took him three or four years to learn how to read again. He now functions well as an NFL analyst for ESPN, but still struggles with bright lights and when he helps his children, Kori, 11, and Beau, 8, with their homework.

"When Mike passed away, you couldn't help but think about it," Hoge said. "There's always a sense of the unknown with these injuries. Will it expedite Alzheimer's? Will it lead to mental illness? At the same time, it helped me realize I made the right decision to retire. I could have challenged it, but ultimately I was jeopardizing my life. When you see it in that perspective, it was a good decision."

Pamela Webster, who divorced Webster six months before he died, pleaded for some peace and quiet during a phone conversation last month. It's not easy to find private space with three kids -- Brooke, 27; Garrett, 20; and Hillary, 16 -- in a one-bedroom house. The two younger children will continue to receive $1,300 a month for college from the NFL until they turn 23, and Pam has a job at a small medical clinic in a nearby town, but despite a children's fund that netted donations of more than $80,000 in the wake of Webster's death, Pam said it's not enough.

"There is nothing to take care of the kids," Pam said. "The NFL needs to take care of its own. Veterans don't have insurance and they're lost after the game. They need to step up to the plate and give these guys their just deserts."

In 1999, the NFL awarded Webster an annual disability of $100,020, which he received the last three years of his life. Last month, the Webster estate received a payment of $309,230 for another three years of disability, going back to September 1996. The NFL Pension Board, made up of three former players, two team owners and Miami Dolphins president Eddie Jones, voted unanimously in January 2003 -- four months after his death -- to grant Webster's estate the dispensation.

"Everybody on the board," said Doug Ell, an attorney for the NFL, "wanted to know what happened to this poor guy."

Nevertheless, Ell said, the Webster estate's request for additional disability fails to meet the retirement plan's eligibility requirements. Retroactive benefits, according to the plan, may cover up to a 42-month span from the date the first claim was filed. In October 1999, the plan's retirement board awarded Webster benefits dating back to September 1996.

The estate, meanwhile, argues that the board committed an "abuse of discretion" in not compensating Webster for being completely disabled for the additional period from the time of his retirement, March 1991 to September 1996. The case is likely to be decided sometime later this year.

"Both sides have filed motions asking the court for summary judgment," said Cyril Smith, co-counsel for the Webster estate. "In a claim of this nature, it's unlikely to go to a jury. Ultimately, it's up to the judge." 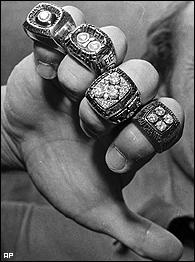 With the arrival of the most recent check from the NFL, the estate is now said to be somewhat solvent. The IRS is, apparently, in the process of being satisfied. A lawsuit by one of Webster's former partners recently was settled for $65,000. There still are some minor house-cleaning items such as defaulted loans and an outstanding insurance claim, but Jani said there will be some money for the family regardless of the lawsuit's outcome. He plans to use some of the money to retrieve the Super Bowl rings; Brooke, the oldest, will get the first one from the 1974 season, Colin the second (1975), Garrett the third (1978) and Hillary, the youngest, the fourth (1979).

With the surprising success of this year's Steelers team, the old players from those great Super Bowl teams are in great demand these days. The autograph signing business has never been better.

"We could have made some money," Jani said. "But I don't know if he'd be happy for the team. Toward the end, he was so hateful with football. In the end, he said football got the best of him -- and it did."

Colin Webster, more than any other family member, has been an outspoken critic of the Steelers and the NFL. Surrounded by rabid fans, he said he can't bring himself to watch a Steelers game.

"They have this huge pension fund and they aren't helping these people," Colin said. "I think, when it's all over, justice will be done."

In the rare moments when Pam Webster isn't consumed with trying to support her children, guilt filters into her consciousness.

"Mike Webster was not a quitter, but I feel I quit on Mike," Pam said. "I should have given it more time, more effort. It's my biggest regret."

She said she hopes the lawsuit shines a harsh light on the NFL's treatment of former players.

"Someday," she said, "I hope there's a Webster Rule, where they're not allowed to play so long."

"They say it's a business -- that's completely fine," Garrett said. "But if you're going to make it a business, then when you f--- up, you have to pay for it. Enron, well, they made a mistake and they had to pay. The NFL needs to solve this problem. Create a retirement exit plan, give 10-year players health care.

"Something bad happened and mistakes were made. How can we correct it in the future?"

After the funeral, they cremated Webster. Jani, Pam and each of the children have some of his ashes. Jani keeps his in an urn on the mantle over the fake fireplace in his home.

"I went through the benefits board of the NFL and I was denied -- twice," Carson said. "They look at things quite differently than the way things are. Let me be as honest with you as I can. The average person will question why Mike did certain things, or didn't do certain things. When you're trained to be a leader and push your way through pain and injuries ..."

Carson, one of the hardest-hitting linebackers in NFL history, stopped for a moment.

"I can very much identify with the struggle he went through," he continued. "For a player to die at 50 -- which is too young for an athlete, a person, period -- it's painful. For a person who never did anything as great as winning a championship and struggled to such great heights, you just won't understand.

"Some of us find a safety net when we fall through a crack. We are somehow able to grab hold. Others fall right through -- and nobody even notices."