JACKSONVILLE, Fla. -- Daunte Culpepper never met Jerry Townsend before Wednesday. But the paralyzed high school football player soon may be getting a gift from the Vikings quarterback. 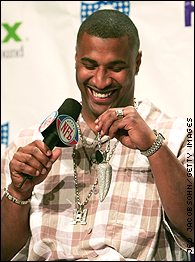 It all started during an NFL awards ceremony on Wednesday, with finalists Culpepper, Peyton Manning, Shaun Alexander and Curtis Martin on stage for the announcement.

When the master of ceremonies opened the floor for questions, Townsend spoke up from his wheelchair in the front row.

"Hey Daunte, can I get some of that ice?" he said in a low
voice, referring to the two sparkling necklaces hanging around
Culpepper's neck.

Culpepper jumped up, pulled off the two diamond necklaces worth about $75,000 and brought them over to
Townsend, a senior defensive back at Jacksonville Episcopal High
School who was paralyzed from the neck down while making a tackle
in October.

Townsend spent the last four months in various hospitals and was
released Wednesday -- just in time to go to the Super Bowl event.

After Culpepper put the necklaces -- one a number "11", Culpepper's
jersey number, and the other a large pepper (for Culpepper) -- around Townsend's neck, his
mother started to cry. His father talked about needing to get a
safe for the expensive jewelry.

Culpepper, meanwhile, went back to his seat and finished the
awards ceremony (Manning won the air award, and Martin won the
ground one) before walking over to the Townsends and asking them to
write down their address so he could send them something else.
Culpepper wasn't sure what it would be.

"I'll get him something else," Culpepper said.