BEREA, Ohio -- Romeo Crennel walked into the news conference
wearing one of his diamond-studded Super Bowl rings and a smile. In
one hand, he held seven notecards chronicling 35 years of coaching
experience. 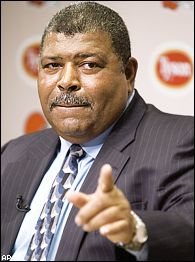 He was missing a big parade and party back in Boston, and
Crennel couldn't have cared less. There was no place else he wanted
to be.

The lifelong assistant was finally a head coach.

Crennel's long wait ended Tuesday as New England's former
defensive coordinator was introduced as coach of the Cleveland Browns, who just six years after their expansion return are
rebuilding once again.

A coaching odyssey that began in 1970 at Western Kentucky and
included stops at Texas Tech, Mississippi, Georgia Tech, New York
and New England, has brought the 57-year-old coach back to
Cleveland, where he was the defensive coordinator in 2000.

"I've been in this league for a while and I've been somewhat
successful as a position coach," said Crennel, who won two Super
Bowls with Bill Parcells and three under Bill Belichick. "Now,
taking the reins of a team and trying to run a whole program is
going to be special. It's a big challenge, but I think I'm ready."

The Browns, who have gone a league-worst 30-66 with one playoff
appearance since 1999, are counting on Crennel to end six seasons
of chaos.

Crennel is the 11th full-time coach in team history and
Cleveland's first black coach. He's also the NFL's sixth minority
coach, but the only one boasting a Super Bowl ring for each finger
of one hand.

Crennel would prefer to be known simply as a coach who wins.

"My skin color is black, but I am a head coach," he said. "I
hope that I possess the qualities that are in a head coach with the
leadership, organization, and the prioritizing. In many cases I
have been the only African-American on a staff or in the
neighborhood. The best thing I can do for other minority candidates
is be successful and a role model."

Crennel received a five-year, $11 million contract from the
Browns, who are coming off a disastrous 4-12 season that was
scuttled by major injuries and highlighted by the resignation of
Butch Davis on Nov. 30.

In hiring Crennel, the Browns selected a more experienced coach
instead of going for an up-and-coming college candidate, as they
did in 2001 when they plucked Davis from the University of Miami.

On Davis' first day with the Browns, he guaranteed Cleveland
fans he'd bring them a Super Bowl champion. Crennel was wise not to
make any promises.

He wants to mold a team in the image of the Patriots, one made
up of tough players of high character.

"Now that I'm a head coach, if I can get the Cleveland Browns --
the team -- to play the way my defenses played with the Patriots,
some of them no-name guys, then the Browns will be competitive and
a team to be proud of," he said.

"Know that it might not happen overnight because it takes time
to build a winner."

In the past few years, Crennel, who began his pro coaching
career in 1981, had been passed over for several head coaching
jobs, including the Browns. At times, the son of a military father
wondered if he would ever get his chance.

On Jan. 7, Browns owner Randy Lerner, team president John
Collins and general manager Phil Savage met with Crennel in Boston
for his interview. It didn't take them long to realize he was their
man.

"There was sort of an aura about him," Collins said. "We were
all shooting each other looks like, this is the guy."

Crennel's priorities in Cleveland will be to hire assistants and
build a relationship with Savage, who was hired the same day
Crennel interviewed with the Browns. The team is counting on the
Crennel-Savage combination to reverse six years of questionable
draft picks and turmoil.

The Browns have split the duties such that Savage will have
final authority over the draft and 53-man roster, and Crennel will
decide who plays Sundays.

Crennel is expected to bring in Maurice Carthon from Dallas as
his offensive coordinator. The Browns have asked for permission to
speak with Carthon, and the Cowboys Web site reported that he's
headed to Cleveland.

Patriots defensive backs coach Eric Mangini is the leading
candidate to run Cleveland's defense, but the club may have to
outbid New England for the 34-year-old's services.

Known for his composure and confidence, Crennel isn't worried
about any comparisons to Belichick, the one-time Cleveland coach
who transformed the Patriots into a dynasty. In fact, Crennel would
appreciate being likened to his old boss.

"I wouldn't mind being considered a genius," he said. "I
might not be there yet, but I can work towards that."