NASHVILLE, Tenn. -- Former punter Reggie Roby, a 16-year NFL
veteran and three-time Pro Bowl selection, died Tuesday after being
found unconscious at home by his wife. He was 43. 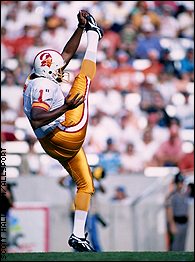 Melissa Roby found her husband with no pulse. Paramedics tried
to resuscitate him at home and in the ambulance, but he was
pronounced dead in the emergency room at St. Thomas Hospital,
according to a statement released by the family.

The cause of death is unknown, the statement said.

Roby was a sixth-round pick in 1983 out of Iowa by the Miami Dolphins, where he played from 1983-92. He also played for the
Washington Redskins, Tampa Bay Buccaneers, Houston/Tennessee Oilers
and San Francisco 49ers, where he wrapped up his career with a
final season in 1999.

"He was an outstanding punter for us and his booming kicks
often helped us win the field position battle," Don Shula, who
coached Roby, said in a statement released by the Dolphins.

"Often on walkthroughs in domed stadiums the day before the
game, he always would try to hit to top of the dome with a punt. He
sometimes succeeded, which illustrates just how strong a leg he
had. Reggie helped define the position and even after he retired,
every time I saw a long, high punt, it always reminded me of one of
his kicks."

Roby even wore a watch during games to help time his punts.
Former Miami defensive end and linebacker Kim Bokamper credited
Roby with being one of the first two-step punters who changed the
speed of getting a punt off.

"He could really turn around a field," Bokamper said. "As a
defensive player, at times he could be your best friend by pinning
a team back. It's a testament to the type of player he was how long
he lasted in the league. He was really at the cusp of the new era
of punters."

Roby ran into financial problems in 1993 and he filed for
personal bankruptcy. The Dolphins released him less than two weeks
later even though his career average of 43.3 yards per punt was
then ninth best in NFL history.

Roby landed with the Washington Redskins for two seasons, and he
earned a Pro Bowl berth in 1994. He spent 1995 with the Tampa Bay Buccaneers, was with the Oilers for their final season in Houston
in 1996 and their first in Tennessee in 1997 and then wrapped up
his career in 1999 in San Francisco.

Roby, who had six children, was the marketing and development
director for Backfield in Motion, a nonprofit group mixing
athletics and academics to help boys in the inner city.

"Reggie was just a kid at heart," said Michael Brown,
Backfield in Motion's chief executive officer. "Reggie was the
ultimate package as far as I was concerned. In this type of work
that we are in, there is no question that it was his calling."