CHARLOTTE, N.C. -- When doctors told Sam Mills that cancer
was eating away at his body and he had just months to live, he
refused to listen.

Mills was a proven fighter. Giving up and accepting his fate
wasn't in his makeup. 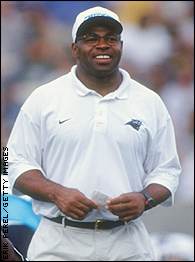 So Mills did what he had done every other time he had to prove
someone wrong: He fought with all his might.

Mills, a five-time Pro Bowl linebacker for New Orleans and
Carolina and an assistant coach for the Panthers, died Monday after
a two-year battle with cancer. He was 45.

"I remember him being the toughest little man I've ever seen in
my life," former Saints linebacker Rickey Jackson said. "He was
Mighty Mouse -- he'd hit you hard as he could every time he hit
you."

Mills spent his entire career doing that, trying to prove his
5-foot-9 frame would not stop him from a career as a professional
football player.

An undersized linebacker out of Montclair (N.J.) State who
failed several times to catch on with NFL and Canadian Football
League teams, Mills gave professional football one last shot when
the USFL debuted in 1983. After Mills starred in that league with
the Philadelphia Stars for three years, coach Jim Mora brought him
along to the Saints in 1986.

Mills spent nine NFL seasons with the Saints, then joined the
expansion Panthers. He finished his career with 1,319 tackles and
started in 173 of 181 games.

There is a statue of him outside Bank of America Stadium and
he's the only player in the Panthers' Hall of Honor.

"Sam was one of the finest people you will ever meet. You would
never know that he was a player who made Pro Bowls and had all this
attention because he treated everybody the same no matter who they
were," Carolina general manager Marty Hurney said.

Mills moved to the Panthers in 1995, and figured prominently in
the franchise's first win, against the Jets on Oct. 15, 1995, when
he intercepted a shovel pass and returned it 36 yards for a key
touchdown.

He led the team in tackles in 1995 and `96, when the Panthers
won the NFC West and made a surprise run to the conference title
game.

Mills joined the Panthers' coaching staff upon his retirement.

"He's definitely the best coach I ever had," Panthers
linebacker Will Witherspoon said. "I got to talk to him the last
couple of weeks and I knew that he wasn't doing well, but he never
wanted to bring that up.

"He always wanted to focus on how I was doing. There's nothing
better than the fact that he concentrated more on other people than
he did himself."

He will forever be remembered not for his on-field
accomplishments, but for the person he was off the field.

"Sam Mills was not only one of the finest football players that
I have ever been around, but above and beyond that, he was one of
the finest individuals," said Houston coach Dom Capers, who lured
Mills away from the Saints when he coached the Panthers.

Kansas City Chiefs president Carl Peterson, who led the USFL's
Stars when Mills was signed, called Mills "one of the toughest
defensive players in pro football pound for pound that I've ever
witnessed."

"He overcame a lot of adversity in his life as a player
beginning with his size. Everyone felt he was too small to play
professional football and his nickname in the USFL was the Field
Mouse," Peterson said.

"I know no one fought harder than he did or probably lived
longer than he should have with the cancer in his body."

Mills was diagnosed with cancer in 2003, hours before he showed
up at the stadium to coach the linebackers in their preseason
finale. It was a devastating blow to the team, which learned two
weeks earlier that linebacker Mark Fields also had cancer.

Carolina restructured its coaching duties to take some of the
responsibilities off Mills during his treatment.

Originally given just a few months to live, Mills didn't miss a
game that season. He scheduled treatment for off days, and often
coached from the press box that year to preserve his strength.

He was an inspiration to the team as Carolina went on to the
Super Bowl. Players wore his No. 51, along with Fields' 58, under
their jerseys that season, and Mills gave an emotional pregame
speech during their playoff run.

He flew to Houston on the Thursday before the Super Bowl, one
day after a round of chemotherapy, and joined Fields for a news
conference. Sweating and holding on to the podium for balance, he
said, "You have your good days and your bad days. I am just glad I
am having days, you know?"

"During the 2003 season," quarterback Jake Delhomme said, "he
told us that the way we played inspired him to keep fighting. I
think it was the other way around. We were able to draw a lot more
from him than he did from us."

Mills continued his treatment all of last season. He was honored
in March by the Ed Block Courage Award Foundation, an
NFL-affiliated charity, with the Johnny Unitas Tops in Courage
Award.

Mills is survived by his wife, Melanie, and four children: Sons
Sam III and Marcus and daughters Larissa and Sierra.