DAVIE, Fla. -- Back in the Miami Dolphins' backfield Monday,
Ricky Williams made all the right moves. 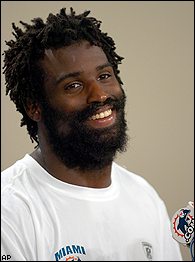 First, he showed up. Then he reached the end zone on his first
carry, smiled at cheering fans, apologized for leaving the team in
the lurch, said he was done with dope and calmly submitted to a
media interrogation regarding his surreal one-year retirement.
One question -- the first one -- momentarily stumped him, though:
Why did he return?
"Why? Why? I don't know. I don't know," he said.
Uh-oh. This roller-coaster ride still seems a little rickety.
Greeted with hugs from teammates and cheers from fans, Williams
returned to the Dolphins for their opening training camp practice
Monday under new coach Nick Saban. Lining up for his first play
since the 2003 season, Williams took a handoff from Gus Frerotte
and sprinted 20 yards to the goal line.
But there was no defense on the field, and Williams is sure to
meet stiffer resistance in the weeks to come as he tries to regain
favor and reclaim a starting job.
"Look, we're kind of in the risk-taking business," Saban said.
"I've talked to the team about it. I think everybody is accepting
of his ability and respectful of him as a competitor. I think
everybody is anxious to see that he is committed and to evaluate
his level of commitment."
At a team meeting Sunday after players reported for camp,
Williams spoke briefly and apologized for the impact caused by his
retirement a year ago last weekend. The Dolphins went into a
nosedive and finished 4-12, their worst season since the 1960s.
"There were things about life that I wanted to explore outside
of football, and I had never had the chance," Williams said at a
news conference after practice. "I realize by making that
decision, I affected the team in a negative way and upset a lot of
fans.
"I'm very regretful that people were hurt in the process of me
doing that. I do realize that to a lot of people it comes off as
being very selfish. So I do offer an apology to all the people who
were negatively impacted."
His words of contrition seemed to satisfy teammates, including
center Seth McKinney, who a year ago called Williams a quitter.
"In the team meeting, he did what he had to do," McKinney
said. "He's a man about it. We're all being men about it. Nobody
is holding any grudges. We all want him back. He's a great
player."
Locker-room teasing helped lighten the mood, players said.
Defensive tackle Larry Chester noted Williams' long, scraggly beard
and multidirectional hairdo.
"Guys were saying he looked like a little homeless guy,"
Chester said. "It was all in fun."
Williams said he found the warm reception from teammates
surprising.
"It's awkward, you know?" he said. "So many things have been
floating around, you just never know what to expect."
His return overshadowed Saban on the new coach's first day of
camp. It was Saban who reached out to Williams in January, laying
the groundwork for the running back's comeback.
When Williams returned to the field, nearly a thousand fans were
on hand in humid, 85-degree sunshine. His name and number 34 were
still missing from a roster handout -- an oversight, a team official
said. But a dozen fans wore No. 34 jerseys, the same ones sold for
half price in South Florida last fall.
When a pass pattern sent him sprinting toward the stands, the
crowd cheered, prompting him to grin. He smiled again later when he
stepped to a lectern to answer questions from a cluster of
reporters, never his favorite activity and something he hadn't done
in 19 months.
When the topic turned to his admitted use of marijuana, Williams
said he no longer smokes it. He faces a four-game suspension at the
start of the season for violating the NFL substance abuse policy.
"Being an NFL player, I had a problem with some of the rules. I
wasn't very comfortable with it, and I decided to walk away from
it, " Williams said. "Being away and having a chance to learn a
lot about myself, I realized that freedom is having the strength to
be in any situation and be content with that situation."
Defensive end Jason Taylor, critical of Williams when the drug
issue surfaced last year, said he considers the matter closed.
"I don't think he needs to talk to us about it," Taylor said.
"It's none of our business. He can deal with things however he
wants. Just don't leave again."
After Williams vanished last July, he lived in a tent in
Australia, studied holistic medicine at a California school and
spent a month at a yoga center in India, becoming certified as an
instructor.
Does he regret the decision to sit out last season?
"It's hard to regret it myself, just because I had an
incredible year," he said. "I got to do pretty much all the
things in my life that I never thought I would do or I had a chance
to do. So for me it was very fulfilling."
Fulfilling but less filling: He lost 30 pounds on a vegetarian
diet and took the field Monday at 213, well below his listed weight
of 226 on the 2004 preseason roster.
He's no longer big enough for the workhorse role he assumed in
2002-03, and he's not even assured of starting. As a hedge, Saban
took Auburn's Ronnie Brown with the No. 2 overall pick in the April
draft.
Brown, ironically, was the running back absent Monday. He has
yet to sign.
Williams said he missed football and his teammates last year,
but money also motivated him to return. A court found the 1998
Heisman Trophy winner in breach of contract by retiring, and
ordered him to repay the team $8.6 million.
"It's like the sword of Damocles hanging over someone's head,"
said Williams' agent, Leigh Steinberg.
Because Williams sat out last season, he's due only the NFL
minimum $540,000 this year, compared with the $3.7 million he
passed up in 2004.