ST. LOUIS -- For the second straight season, the Chicago Bears are
bracing for a long stretch without quarterback Rex Grossman. 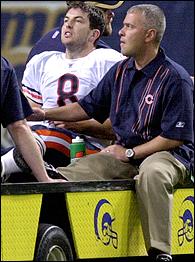 If this year is anything like the last, the Bears' passing
attack will be absolutely lost while he stands on the sidelines.

Grossman, who played only three games last season before being
derailed by a ruptured right knee ligament, will be out three to
four months after breaking his left ankle early in the second
quarter of Friday night's 17-13 preseason loss to the St. Louis Rams

"I'm hurt and I'm going to get better," Grossman said.
"That's the only thing I can do, so that's all I'm focusing on is
getting healthy again and going from there.

"All I can do is be positive and know that I've got another
tough challenge in front of me. I feel like I've been through hell
and I'm going to come out of it and good things are going to
happen."

Grossman was hurt with 11:08 to go in the first half on a 4-yard
completion to Darnell Sanders. He was flushed from the pocket by
Jeremy Loyd and Trev Faulk and spun and dropped by Faulk, initially
getting back to his feet after the hit.

But then, limping, Grossman signaled for a trainer. He sat down
and grabbed his left knee in pain, slamming his helmet on the cart
before being taken off the field. Grossman knew immediately it was
a serious injury after feeling something pop in his ankle.

"I began praying as soon as he hit the field," said wide
receiver Muhsin Muhammad, who was added in the offseason to boostthe Bears' nonexistent passing game.

The Bears used four quarterbacks last year and have used at
least three in six of seven seasons. They could be stuck in a
similar predicament this year with backup Chad Hutchinson, who was
1-4 as the starter last year.

"If we're contingent on just one player, then obviously we
didn't build this team to win," general manager Jerry Angelo said.
"It's a tough blow, I'm not going to sit here and say it isn't.

The former Florida star was carving up the Minnesota Vikings
defense, keeping Chicago in the game on 21-for-31 passing for 248
yards before leaving with what at the time looked like a sprained
knee.

But Grossman left the Metrodome that day wearing a brace and
using a crutch, and the Bears lost not only the game, but their
hopes for any real offensive production.

They hope that isn't the case again this year.

Chicago was 5-11 last year in Lovie Smith's first season as head
coach, losing six of their last seven games with the NFL's worst
offense and finishing with more lost fumbles (21) than offensive
touchdowns (19). The Bears were ranked last in six major
statistical categories, including scoring and total yards.

"It's adversity, but I think we'll be able to respond well,"
running back Thomas Jones said. "Chad Hutchinson is a great
quarterback. He proved himself last year and we have some other
young quarterbacks who are good, too.

"When one guy goes down, another has to be able to step up, and
I think Chad would be ready to do that.'"

Angelo said in the offseason that he was
committed to having a veteran backup on board, but the team passed
on Kurt Warner, Brad Johnson and Jay Fiedler.

After the game he said he did not
second-guess that decision.

"I don't know exactly who there is out there but we like the
guys we have right now," the coach said. "Chad Hutchinson is a
good player, we feel comfortable starting him, and Kyle Orton
continues to shine as far as we're concerned.

"As a team, we're not feeling sorry for ourselves."

Grossman was 6-for-11 for 52 yards before leaving the scoreless
game. He was replaced by Hutchinson, who led the Bears to their
only first-half score on the same drive.

Grossman, a first round draft pick and Heisman trophy runner-up,
was 3-3 in the 6 games he started for the Bears over two seasons.