Maurice Clarett's gamble for the big dollars in the NFL failed for a second time. The Denver Broncos informed Clarett on Sunday that he is being released. 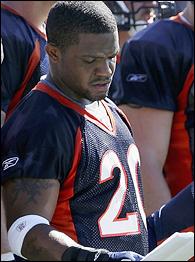 Mike Shanahan surprised the league by using a third-round draft choice on the former Ohio State running back in the final selection of the round. The Broncos coach thought he had the cutback style of running that fit in one of the league's best running systems.

As it turned out, Shanahan made a mistake and didn't want to waste time admitting it. With Tuesday's deadline for cutting the roster to 65 looming, Clarett, who never made the field in three preseason games, was let go.

Clarett first gambled that he could beat the NFL in court after applying despite not being three years out of high school. The case failed and Clarett had to sit out and wait until the 2005 season to get his chance to turn pro.

Clarett's second gamble was on his contract. He felt he was a first-round choice and wanted a contract similar to what a first-rounder would receive. To accomplish that, he tried to do get that contract with incentives. The four-year deal he pushed for included no signing bonus.

The Broncos were willing to give him a $410,000 signing bonus, but Clarett opted to push that money into workout bonuses in 2006 through 2008. Clarett agreed to only a $230,000 base salary in 2005. If he put up good numbers, Clarett had the opportunity to make $7 million over the four years of his contract.

"I'd love to see someone pick up the contract," Clarett's agent, Steven Feldman, told The Associated Press. "The way the incentives in the contract are, he won't get them
with another team."

By releasing him, the Broncos won't take any cap hit. It also appears unlikely that they would sign him to their practice squad, although that remains an option if Shanahan is interested.

For the moment, the Broncos are three deep in halfbacks. Mike Anderson is expected to be the opening day starter. Tatum Bell should be the backup, and Shanahan likes what he sees from former Giants No. 1 pick Ron Dayne.

Despite his failure in Denver, Clarett should receive some interest from other teams although it is likely teams may not want to claim his four-year contract. There is a 24-hour waiver claim period that begins Monday when he goes on the league waiver wire. If he is cleared by Tuesday at 4 p.m., Clarett is eligible to sign with any team in the league.

"I'm not real confident of anything at this point," Feldman told the AP. "We'll see what happens now."

John Clayton is a senior NFL writer for ESPN.com.