In a profile in Sunday editions of The New York Times, Coles said he was molested between the ages of 10 and 13 by a man his mother later married.

The Pro Bowl wide receiver thought he was alone in his inner
struggles, and too proud to let any outsiders into his personal
prison. But Coles recently decided to free himself of his secret in the hopes it might help other children who have endured abuse.

"I haven't talked about it in ... forever, but I know that
holding something like that inside has been a burden for so long,"
Coles said Sunday after helping the Jets beat Miami 17-7. "For me
to get on this platform that I have, having been in the league and
have all the media attention that we have, I think it's something
that should be said. 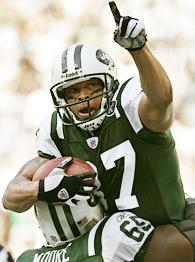 Coles remained silent about the abuse for years,
instead using it to drive him to become one of the NFL's best receivers. He said even close friends on the Jets were unaware that he had been abused.

According to the Times, Coles' stepfather, whose name the
receiver didn't want to reveal, was sentenced to nine years in a
Florida prison in 1992 after pleading guilty to the crimes. He
served 3½ years,but was later convicted of another crime and has
been in prison since 2001.

Coles' mother, Sirretta, divorced her husband when the abuse was
first revealed and sought counseling for the youngster. Coles
realizes that coming out with this now publicly will reopen old
wounds for the family.

Coles told The Times that he received counseling, but it clashed with the athletic mentality of shrugging off injuries.

Coles doesn't worry about what others might think or say about
what he went through. He's proven himself to be a star on the
football field, now in his sixth NFL season -- and second stint with
the Jets after spending the last two years with Washington.

"I think with age comes maturity, and I think now that I'm a
little older, I think I can deal with it a little better and I just
want to help kids because I think it happens to more people in this
world than we actually allow ourselves to believe," said Coles, 27.

"Coming up, I always felt like I was the only one that ever
happened to. Then, when I started going to different sessions, they
let me know that it happens to a lot more people."