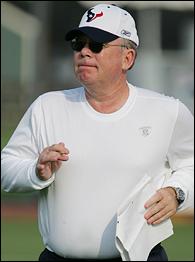 "We have not performed up to our expectations," Capers said.
"We needed to make an adjustment to help us move forward in the
direction we want to go."

Capers and quarterback David Carr agreed that offense needs to
be more consistent and hope this change will facilitate that.

Palmer, who had been the offensive coordinator since the team's
inception, also called the plays.

The Texans lost to Pittsburgh 27-7 on Sunday after losing to
Buffalo 22-7 in the opener. Houston has averaged the fewest yards
(170.5), fewest passing yards (66.5) and points (7) in the NFL
through its first two games.

In Sunday's game, Carr appeared to be confused. He was sacked
eight times -- the most since the expansion year in 2002 and one shy
of the most in the team's 50-game history.

Against Buffalo, Houston allowed five sacks and had five
turnovers.

Carr said he didn't like the feeling he's had the last two weeks
and that he's happy with any change that will improve the team.

"I just want to get back to where we feel good about going out
on Sundays," Carr said. "Feel like we have a chance to go out and
compete against the teams that we feel like we're just as good
as."

Palmer joined the Texans after being fired after two seasons as
coach of the Cleveland Browns.

Capers said he's been "evaluating the big picture" for a while
and that this decision is a culmination of Houston's poor
performance in a season-ending loss to Cleveland, in the preseason
and the first two games.

He said over that period it became "apparent to me that things
weren't working."

Houston has a bye this week before traveling to Cincinnati on
Oct. 2. Capers said the extra week of preparation made it the
"logical time" to make a change.

Pendry was the offensive coordinator under Capers for three
seasons at Carolina. He spent 1998-2000 in the same position with
Buffalo.

In his first season with Buffalo, the Bills improved from 25th
in the NFL in offense to sixth and reached the playoffs.

Pendry said that he hates to do the job under the circumstances.

"It's not fun to go into this situation, but it's my job," he
said. "I've been asked to do it and I'll do everything in my power
to give us the opportunity to win."

He said he'll work to improve the offense to help relieve the
pressure on Carr.

"We have to put him in a position to do his job and not have to
go win the game for us every time," Pendry said. "We have ten
other guys out there. They've got to go play."

Carr said he's excited about working with Pendry and that he
thinks he will help the offense play to its strengths. He also
remains confident that the team can turn things around and believes
execution will be the key.

"When we go out and execute and do what we're supposed to do we
can be a good football team," he said. "When we don't we're a bad
football team. It's no secret."

Steve Marshall, who has coached the offensive tackles, will take
over Pendry's job.