Chad Pennington has been informed by team physician Dr. Elliott Pellman that he has a torn right rotator cuff, and the chilling diagnosis -- if seconded -- is likely to end the Jets quarterback's season and perhaps jeopardize his football career. 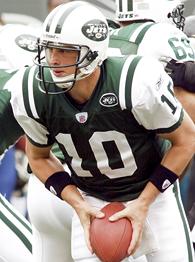 The diagnosis by Pellman, confirmed by ESPN.com and ESPN's Chris Mortensen on Monday night through a team official who requested anonymity and also through a source close to Pennington, came after Pellman's analysis of an MRI conducted earlier in the day. A team official conceded earlier in the evening Monday there was "some suspicion" Pennington may have severely damaged his right shoulder for the second time in less than a year.

The team will withhold any determination about the extent of the injury, however, until Pennington is examined later this week by Dr. James Andrews, the noted Birmingham, Ala.-based orthopedic specialist who performed surgery on the quarterback's shoulder this spring. That exam could occur as early as Tuesday.

"It's tough to deal with, knowing what Chad went through last year, and just fighting to get back to where he could play again this year," Jets center Kevin Mawae said in an ESPN Radio interview Monday night. "I just spoke with him a little while ago and he's a little down in the dumps right now. From the friend standpoint, you have to feel bad for the guy, from a team standpoint we just have to move on with the guy that comes in there. Brooks Bollinger is going to do a great job and maybe he'll provide the spark for us that we need on offense."

The agent for Pennington said Monday evening that, even after the MRI exam, there was no final determination on the extent of the damage or on how long he might be sidelined.

"There's nothing yet," agent Tom Condon said. "We'll just have to wait and see what Dr. Andrews says after he gets a look at it."

Pennington's original injury became a subject of much scrutiny after Jets officials acknowledged following the 2004 season that they had intentionally downplayed the seriousness of the shoulder problem. On Monday, coach Herman Edwards declined to speculate about the injury, saying only that he would likely have more information on Tuesday.

Andrews cautioned that Monday's MRI results could actually show Pennington damaged scar tissue from his earlier surgery, which would not be as serious. Andrews said he hopes that new tests taken Tuesday will determine whether Pennington sustained a rotator cuff tear.

The Associated Press first reported Pennington would be lost for the season, saying it was confirmed by a person with knowledge of his condition, but who declined to be identified because the team had not made an official announcement.

The Jets were already preparing for third-string QB Brooks Bollinger to lead the team Sunday against the Baltimore Ravens.

Pennington, who had offseason surgery to repair a torn rotator cuff in the shoulder, was sacked on consecutive plays during the Jets' first series of the second half against Jacksonville. On third-and-11, Pennington was taken down by Bobby McCray and the quarterback fumbled for the second straight down and recovered the ball, but his shoulder was injured on the play.

His backup Jay Fiedler came in, but was hit while completing a 16-yard pass to Justin McCareins -- his sixth play in place of Pennington -- with 13:09 left in the fourth quarter. A downcast Fiedler indicated after the game that he was fearing the worst.

"I kind of landed with my arm above my shoulder and I felt something go," he said Sunday. "I knew I wasn't going to be able to throw a football."

A source told the New York Daily News that Fiedler will miss at least six to eight weeks with a partial dislocation of his right shoulder.

Fiedler also will see Dr. Andrews on Tuesday for a second opinion, according to the Daily News.

Pennington came back to lead the Jets on two scoring drives, both capped by field goals, but clearly was hurting and said after the game that the injury felt "similar to last year." Even so, Edwards said he and Pennington made the right call by letting Pennington back in against the Jaguars instead of going with Bollinger -- though the play calling was limited by Pennington not being able to throw long.

"He gave us the best chance to do what we needed to do to win the game," Edwards said. "I had reservations, but he was able to go in and do some things."

The Jets are bringing in three quarterbacks -- Doug Johnson, Jesse Palmer and Jonathan Quinn -- for a tryout, ESPN's John Clayton has learned.

Another player who might be considered is former Dallas starter Quincy Carter, who played for the Jets in 2004 and started three games.

As for Bollinger, he's looking at his NFL starting debut as a chance to show the Jets what he can do -- but he's focused on the task at hand: beating the Ravens.

"I think anytime you get an opportunity in there as a quarterback, especially not being a first-round pick or whatever, it's an unbelievable opportunity," he said. "It can turn into anything, but again, there's enough on my mind and I have enough to worry about this week that whatever it turns out to be down the road, fine, great, but I'm just worried about this week."

Information from The Associated Press and ESPN's Chris Mortensen was used in this report.