EDEN PRAIRIE, Minn. -- Minnesota Vikings owner Zygi Wilf
said Friday he had met with players to express his anger and
embarrassment over reports of sexual misconduct on a charter cruise
last week, and vowed to do all he could to prevent further
scandals.

Wilf, in his first comments since the story broke, said the team
will institute a code of conduct that demands "high standards,
high morals and success." 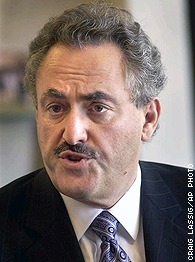 Wilf said the Vikings will cooperate fully with authorities and
"levy the appropriate fines, penalties and/or suspensions" as
soon as the investigation is complete.

"If there was any sense that we would look the other way
regarding this type of behavior, I want to make it extremely clear
that this behavior will never be tolerated again," the New Jersey
real estate developer said slowly and carefully as he read a
statement to reporters.

Stephen Doyle, an attorney representing the boats' owners, has
said cornerback Fred Smoot paid for one of the cruises on Lake
Minnetonka last week. A total of about 90 people were present,
Doyle said. They returned to shore more than two hours early when
crew members complained of wild, lewd behavior.

The Hennepin County Sheriff's Office is investigating, and no
charges have been filed.

Wilf and the Vikings have been pursuing state money for a new
$675 million stadium in Anoka County. Senate Majority Leader Dean
Johnson, who told the West Central Tribune that Wilf called him on
Wednesday to apologize for the sex scandal, said the stadium deal
is "literally off the radar screen."

Wilf also said head coach Mike Tice's job is not in jeopardy.
The Vikings, expected to have a strong team this season, are off to
a 1-3 start.

Wednesday, Smoot's agent, Bus Cook, told ESPN.com's John Clayton that the cornerback didn't pay for any of the cruises.

"Fred Smoot did not pay for this boat trip in any way," Cook said. "He didn't write a check for it. He didn't put it on his credit card. He did not pay money in any regard for this trip."

Cook, however, didn't deny that Smoot was one of the players in attendance.