FOXBOROUGH, Mass. -- Tedy Bruschi is ready to play football again, just eight months after a mild stroke left him unsure whether his life would ever return to normal.

"I came to the point where they tell me I can play. I feel like I can play. Shoot, I know I can play," Bruschi said Monday. "So let's just play."

Coach Bill Belichick will decide when to use him in a game, but Bruschi said he has no doubt it will be this season. Belichick said it's possible Bruschi will play in the Patriots' next game against Buffalo on Oct. 30 after a bye next weekend. 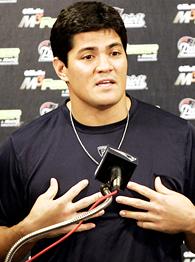 "Tedy's come a long way," Belichick said on his regular Monday appearance on WEEI radio. "He looks pretty normal to me. So it's great to see him just acting and carrying himself that way. That's the Tedy Bruschi we all know and love."

Bruschi, the emotional and tactical leader of the defense and one of only four current Patriots to play in each of their four Super Bowl appearances since 1996, said he isn't returning because the Patriots are struggling. And it's not because his hunger to play needs feeding or his ego demands massaging, he said.

In the early days after the stroke, one of his biggest concerns was "would I ever see again?"

So the decision to return is something the 32-year-old defensive captain and father of three young sons didn't make lightly.

"I'm not just doing this just because I just want to play," he added. "I mean, come on. I lost my sight. One morning, one day you wake up and you can't see your sons very clearly anymore because you've had a stroke. You can't walk. You can't walk write."

Gradually, he and his wife, Heidi -- "what husband would just do this on his own?" he said -- came to the realization that he was ready to practice.

"There were times, in my mind, I thought I was done," Bruschi said. "If I could express to you what this means to me [to return] I would, but I don't know if I really can."

He made his first Pro Bowl appearance on Feb. 13 but was hospitalized three days later after complaining of numbness in his left arm and left leg. In March, surgeons repaired a small hole in his heart.

"Physically, Tedy is completely back to normal and is completely healthy," Dr. David Greer, a specialist from Massachusetts General Hospital who has monitored Bruschi's condition, said in a statement Sunday.

Bruschi had said last month that he would not play this season. But he has been working out in the Patriots' weight room, attending team meetings and standing on the sideline at home games. He also saw several doctors and, he said, all assured him that he could play this season.

"I'd say being able to see again might have helped a lot" with his decision, Bruschi said with a laugh.

And what if he has to stick his head into a pile to stop a runner?

"I don't have any reservations," he said. "Football is a contact sport."

Without Bruschi, the Patriots are 3-3 and have allowed the most points per game in the AFC after Sunday's 28-20 loss in Denver in which they gave up three plays of 55 yards or more.

Last season they were 14-2 and gave up the third fewest point in the NFL. Injuries to key defensive players Richard Seymour, Rodney Harrison and others have been costly.

Bruschi has played nine full seasons since the Patriots drafted him. He said he's in practice shape, and Belichick said Bruschi's weight and speed are about the same as they were before the stroke. And he knows the system very well.

Bruschi remains on the physically unable to perform list where he has been all season. That allows him to start practicing with the team after the sixth week of the regular season. The seventh week begins Tuesday, but the Patriots don't practice then.

From the day he starts practicing, the Patriots have 21 days to activate him or put him on injured reserve, which would keep him out for the season.

He sees himself as "just another player" whose playing time will be determined by what Belichick thinks is best for the Patriots.

But after having trouble walking down steps eight months ago, Bruschi is confident he can play with his same aggressiveness, something any teammate who goes easy on him during drills will learn.

"If they do," Bruschi said, "they're just going to have to watch themselves in practice."