OAKLAND, Calif. -- Charles Woodson broke his right leg, and
Derrick Gibson dislocated his left wrist Sunday, leaving the
Oakland Raiders without two key starters in their secondary for up
to two months. 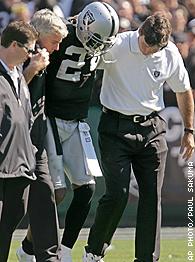 Coach Norv Turner gave the preliminary diagnosis of the two
players after Oakland's 38-17 victory over Buffalo and said the
players would undergo further tests Monday, holding out hope for a
more positive diagnosis.

"Those are six-to-eight week injuries, but I can't say that's
the final deal," Turner said. "We'll know more in the morning."

Woodson was banged up while making a tackle on Bills running
back Willis McGahee with about 4 minutes left in the quarter.
Woodson was attended to by trainers on the field before limping to
the sideline.

Woodson had a boot on his right foot and would only shake his
head and say "it's broken" when asked how he was doing. Woodson,
a four-time Pro Bowler, is being paid about $10.5 million this
season as the Raiders' franchise player. His versatility has been
extremely valuable as he has played cornerback, safety and provided
strong run support.

Gibson was hurt on the Bills' opening drive, holding his left
wrist as he walked off the field following Kelly Holcomb's 5-yard
touchdown pass to Lee Evans.

"We're going to miss both of them a hell of a lot," defensive
tackle Warren Sapp said. "But the show goes on."

The injuries forced the Raiders to rely on rookies and special
teams players to shut down the Bills.

Oakland frequently used three rookies at a time in the secondary
-- Fabian Washington, Stanford Routt and Chris Carr -- and special
teams standout Jarrod Cooper got his most extensive playing time yet
on defense. Carr had been used primarily as a kick returner and had
barely played defensive back in practice so far this season. Cooper
has also gotten only limited time in practice.

"I thought maybe they would try to exploit those guys a little
bit," starting free safety Stuart Schweigert said. "Even when
they tried, they were knocking down passes, making tackles and
stopping them short on third downs. It was awesome to see."

The Raiders limited Kelly Holcomb to 159 yards passing and
McGahee to 50 yards on 16 carries. After scoring a touchdown on a
14-play drive to open the game, the Bills made only eight first
downs the rest of the way.

"All of us got reps in practice so if something like this would
happen, we'd be ready," Washington said.

The Raiders did have one positive injury note. Randy Moss,
listed as doubtful with injured ribs, groin and pelvic area, was
able to play. He entered the game late in the first quarter and
caught a 15-yard pass from Kerry Collins on the receiver's second
play in the game.

Moss added a 22-yard touchdown reception in the second quarter,
his third score of the season, and finished with three catches for
43 yards.

Turner said he didn't know if Moss would be available to play
until just before the game time. With Moss still limited, the
Raiders mostly used him when they were deep in Buffalo territory.

"This morning he went out and ran and was excited about the way
he felt," Turner said. "We tried to plot a plan on how we'd use
him. That's what we did. ... He made a couple of big plays that
helped us."