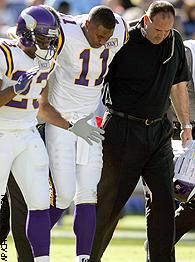 Then came confirmation Monday that quarterback Daunte Culpepper will miss the rest of the season with a devastating injury to his right knee. He was placed on injurd reserve Tuesday.

Not exactly the news a 2-5 team needed to hear.

"This is just another hurdle we have to overcome," coach Mike
Tice said.

Culpepper, a three-time Pro Bowl pick whose effectiveness this season had fallen off dramatically after a career year in 2004, tore his anterior cruciate, medial collateral and posterior cruciate ligaments in Sunday's 38-13 loss at Carolina.

Once the swelling subsides, the 28-year-old Culpepper will have surgery followed by several months of arduous rehabilitation. It
typically takes a player with an injury of this nature a year to
recover, but at least right now the Vikings are optimistic about
the quarterback's status for 2006.

"Our expectations are he's going to be ready for the season,"
athletic trainer Chuck Barta said.

Culpepper was hurt on the final play of the first quarter when Panthers cornerback Chris Gamble hit him low at the end of an 18-yard run for a first down.

"I was right behind him, trailing it, and I saw it all
happen," said center Melvin Fowler. "It's sad and unfortunate.
He's a great player, and he'll be missed for the time that he's
out."

Veteran Brad Johnson, who played for the Vikings from 1992-98 and returned to his original team this year, will be the starter.
Untested Shaun Hill moves up to second string.

Culpepper finishes with six touchdown passes and a league-high
12 interceptions and an ugly passer rating of 64.4. Last season, he
threw for 4,717 yards, 39 TDs and only 11 interceptions with a
rating of 110.9 -- and set an NFL record for combined yardage
passing and rushing.

The Vikings were widely considered one of the best teams in the
NFC at the beginning of the year, but they've so far endured two
miserable months. Still-unresolved allegations of sexual misconduct
by several players on a boat party earlier this month darkened a
season that was already deteriorating.

The Vikings' once-mighty offense had already fallen on hard times with the loss of several key ingredients. Offensive coordinator Scott Linehan left after last season, star receiver Randy Moss was traded and Pro Bowl center Matt Birk will miss the entire 2005 season while recovering from surgery. Culpepper was under constant pressure behind a leaky offensive line and bothered by pre-existing soreness in the knee.

"Daunte pours his heart and soul into the game and into every
play," Johnson said. "It's the first time I've really seen him go
down hard. Your heart goes out to him. I hope he recovers as fast
as he can."

Johnson is not nearly as nimble as Culpepper, but the
37-year-old has a Super Bowl ring from 2002 with Tampa Bay and the
respect of his team.

"The most important thing is just be yourself," he said. "You
can't fake it. The proof is putting up points. The proof is winning
ballgames."

This is the third time in six seasons as Minnesota's starter
that Culpepper will be sidelined. In 2001, he missed the final five
games after surgery on a sprained left knee. In 2003, he sat out
two games because of an injury to his lower back.

Though Culpepper's right knee was already hurting before
Gamble's hit, Barta said that had nothing to do with this injury.
No decision has been made about who will perform the surgery or
when it will take place, but it will likely occur before
Thanksgiving.

Culpepper, unavailable for comment Monday, was devastated after
the game. Tice has talked to him a couple of times since, and the
quarterback was still trying to digest what happened.

"His spirits are OK," Tice said. "I think that is the best
you can say."