PHILADELPHIA -- Terrell Owens can take his touchdowns and dance somewhere else. 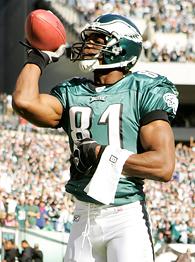