<
>
Giants co-owner Tisch, 79, dies from brain cancer
New York Giants
16y
Ortiz accepts Hall call; Bonds, Clemens shut out
Philadelphia Phillies
6hBradford Doolittle
AB to pursue legal action against Buccaneers
Tampa Bay Buccaneers
2hJenna Laine
Clips do it again, rally from 35 down to stun Wiz
LA Clippers
9mOhm Youngmisuk
Saints' Payton steps away, unsure of what's next
New Orleans Saints
10hMike Triplett
Sources: Louisville in talks to separate with Mack
Louisville Cardinals
5hJeff Borzello and Pete Thamel
Rodgers hints his decision likely by tag deadline
Green Bay Packers
8hRob Demovsky
Auburn wins first game in school history as No. 1
Auburn Tigers
1h
American Collins joins Keys in Australian semis
4h
Finally healthy and as intense as ever, Danielle Collins is back in the Australian Open semis
56mD'Arcy Maine
What makes David Ortiz a Hall of Famer? Stories from those who know him best
Boston Red Sox
6hESPN.com
Hall of Fame voting winners and losers: David Ortiz gets in, who else got good (or bad) news?
Boston Red Sox
6hESPN.com
Sean Payton put the New Orleans Saints in a 'better' place, but what's next?
New Orleans Saints
3hMike Triplett
Why Sean Payton's shadow will loom over Cowboys' Mike McCarthy
Dallas Cowboys
6hTodd Archer
32 NFL teams, 32 big free-agent decisions: Which players will return to their 2021 team?
Green Bay Packers
18hNFL Nation
Dustin Johnson, Justin Thomas and Rory McIlroy all looking for different levels of better
17hMark Schlabach
How to watch the PGA Tour's Farmers Insurance Open this Wednesday-Saturday on ESPN+
17hESPN.com
'Sirens are not unusual at AFCON': Inside the stadium disaster in Cameroon
5hEd Dove
Is it dribbling or is it showboating? And where do you draw the line?
13hJulien Laurens
USMNT favors frigid forecast, but will it yield home-field advantage?
12hJeff Carlisle
No Azteca fans? No Flores call-up? Mexico faces tough task ahead of crucial World Cup qualifiers
10hCesar Hernandez
'It's not about the talent': Patrick Ewing and the battle to avoid another lost season at Georgetown
Georgetown Hoyas
18hMyron Medcalf
Do the New York Giants need an experienced head coach to pair with rookie GM?
New York Giants
19hJordan Raanan
Will Jon Jones be the next challenger for the UFC heavyweight championship?﻿
2dMarc Raimondi
MLB lockout latest: What can we expect from this week's negotiations?
8hJeff Passan and Jesse Rogers
Time will tell if Villa's gamble on Coutinho pays off for both sides
20hIan Darke
Balotelli's back! What has Italy striker been up to during international exile?
16hChris Wright
Transfer Talk: Tottenham's Dele Alli wanted by five clubs in January window
6hLuke Thrower
Which players could move before the January window closes?
2dMark Ogden
Breaking down the 2022 girls' McDonald's All American basketball recruits
Georgia Lady Bulldogs
9hShane Laflin
Transgender swimmer Lia Thomas stays the course
3dKatie Barnes
Nov 15, 2005

NEW YORK -- Robert Tisch, co-owner of the New York Giants
and a civic leader in New York City for several decades, died
Tuesday of brain cancer. He was 79. 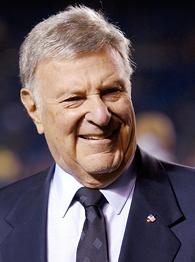 Mara was the son of team founder Timothy J. Mara. Tisch bought
50 percent of the Giants in 1991 from Tim Mara, Wellington Mara's
nephew, not long after the Giants beat Buffalo in the Super Bowl.

"To lose Bob Tisch so soon after we lost our father is
especially heartbreaking for the Mara family," said John Mara, the
Giants' chief operating officer. "He not only was a great business
partner, he was a dear friend to our family and to me personally.
... We will miss him terribly, and we will never forget everything
he did for our family, our team and the numerous charitable causes
to which he was devoted."

Tisch was also U.S. postmaster general from 1986-88 and chairman
and director of Loews Corp., a company he and his late brother,
Laurence Tisch, had purchased in 1959 when it was a movie theater
chain. The company changed its name from Loews Theaters in 1971 and
currently owns and operates Loews Hotels, the Lorillard Tobacco Co.
and Bulova Corp., among other interests.

Tisch was diagnosed with an inoperable brain tumor in 2004 and
had curtailed his regular visits to Giants practices and games.

During his illness, his son, Steve Tisch, was named the Giants
executive vice president and took on a larger role in the
operations of the team, particularly in the negotiations between
the Giants and the state of New Jersey over a new stadium at the
Meadowlands sports complex.

Steve Tisch and brother Jonathan Tisch, the Giants' treasurer,
addressed the team after practice on Saturday, the day before the
Giants lost to the Minnesota Vikings at the Meadowlands.

The Giants will continue to be co-owned by the Tisch and Mara
families.

"I wanted to express to the players, the coaches and really the
whole staff what being involved with the New York Giants has meant
to my father," Steve Tisch said. "For the 14 years he's had the
privilege of owning this team, it's been the greatest gift for him,
professionally and personally."

A native of New York, Robert Tisch was involved in numerous
civic organizations in the city. He served as the chairman of the
New York Convention and Visitors Bureau for 19 years and was
chairman of the Citizens Committee for the Democratic national
conventions held in New York in 1976 and 1980.

Mayor David Dinkins in 1980 appointed Tisch the city's
ambassador to Washington, a post he held through 1993. He also was
chairman of the New York Chamber of Commerce and Industry from 1990
to 1993.

Football was his love, his family said.

Among the charitable organizations Robert Tisch helped found was
Take the Field, a nonprofit corporation that has raised more than
$130 million to renovate and rebuild public school athletic
facilities in New York.

Born Preston Robert Tisch on April 29, 1926, he attended
Bucknell University and, after serving in the military in World War
II, earned a bachelor's degree in economics from the University of
Michigan.

He is survived by his wife, Joan Tisch, and three children.