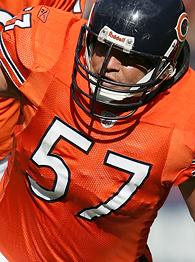 Miller, who initially said the injury occurred in a fall at
home, needed surgery after Kreutz broke his jaw in the altercation
last week.

An FBI official said several Bears were invited to take target
practice. The official, who spoke on condition of anonymity because
of the internal investigation, said it is common for FBI field
offices to invite community groups to shooting ranges.

The official said the fight took place after the shooting
session, during a barbecue for FBI employees and the players. He
confirmed that alcohol was consumed during the barbecue, but
insisted there was no drinking during the target practice.

Reports of an altercation surfaced after last Sunday's 17-9
victory over San Francisco, and details have continued to leak.

The Chicago Sun-Times, citing sources, reported roughhousing
between Miller and Kreutz escalated to a full-blown altercation. As
he was being escorted out the door, Miller turned around and went
toward Kreutz, the newspaper reported. Kreutz then hit him in the
face and Miller responded by striking Kreutz in the head with a
five-pound weight, opening a cut that required 13 stitches.

Coach Lovie Smith told reporters on Monday he was not aware of
the incident until last weekend. He also said then that neither
player would be suspended, but intimated they would be fined.

Both players' agents said Wednesday night neither the Bears nor
the NFL had taken disciplinary action.

Kreutz's agent, Mark Bartelstein, said, "Once they have all the
facts, we'll have a decision to make."

And Smith said, "We'll handle it within, and that's really all
I'm going to [say] about it. Teamwise, we're looking at Carolina
right now."

Smith said the Bears "have had a great relationship" with the
FBI and added: "Those circumstances that happened didn't have much
to do with them. The guys that were involved in it, they're paying
a price right now."

General manager Jerry Angelo was not available for comment.

"I think you guys care about this more than we do," Miller
said to reporters.

After practicing for the first time since the incident, Miller
put the odds of playing this Sunday against the Carolina Panthers
at 50-50.

"I just had to watch what I was doing, make sure I didn't get
in too much contact and get an elbow or something like that," he
said.

The broken jaw knocked Miller, one of the key offseason
acquisitions, out of the 49ers game and ended a run of 110 straight
starts dating back to 1998.

Although he said he's "feeling pretty good," Miller had some
difficulty talking, and his bottom lip was black and blue. He said
he won't be able to eat solid food for another week and has lost 15
pounds. For now, his diet consists of soup and energy drinks.

But Miller said there's no lingering animosity toward Kreutz. In
fact, they joked around briefly in the locker room on Wednesday.

"No matter what it is in life, you make mistakes and move on,"
Miller said.

Miller said he's not concerned about refracturing the jaw. The
bigger issue to him is his stamina and pain threshold.

"It's a matter of how much pain I can deal with, what my
stamina is going to be out there," Miller said.

The Bears (6-3) are on a five-game winning streak and have the
NFL's top-ranked defense. A win over NFC South leader Carolina
(7-2) could go a long way toward validating their claim they are
more than just an average team leading a weak NFC North.

But they also have this issue.

Quarterback Kyle Orton said, "It's something that happened and
you can't take back. ... We got past the last game. It was an
unfortunate situation. It happened off the field, but it's back to
work. We've got a big game this week, and it's too big a game to be
concentrating on off-the-field stuff that has no bearing on it."

During his nine seasons with Carolina, Bears wide receiver
Muhsin Muhammad served as a witness in court hearings for Rae
Carruth, who was charged with arranging the murder of his
girlfriend, and Deidra Lane, who shot husband Fred Lane to death.
Muhammad was also arrested three years ago on misdemeanor drug and
weapons charges.

"We've had a lot in Carolina," he said. "One of the guys is
doing a whole lot of time. There's a lot of serious stuff that went
on. ... We just put it behind us."