Editor's note: This story was first published in November of 2005, after Donovan McNabb's season was ended by a sports hernia.

Executives at Electronic Arts might one day find it challenging to get an NFL player to pose on the cover for its Madden game. 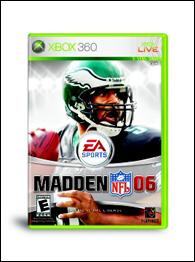 Chalk up another one to the "Madden curse," now that Philadelphia Eagles quarterback Donovan McNabb has elected to have surgery to repair his sports hernia and is expected to miss the rest of the season.

After the video game company announced in June that McNabb would be on the cover, the quarterback told ESPN.com that the cover athletes getting hurt "might be a trend, but I don't believe in the curse at all."

But just look what happened.

McNabb suffered the sports hernia in Week 1. His best wide receiver, Terrell Owens, was suspended for conduct detrimental to the team. And McNabb has had more interceptions (nine) in nine games than he had all of last season (eight).

In his entire seven-year career, he has missed a total of seven games due to injury. He will now miss seven games this season. It will also be the first time in McNabb's career that he will have surgery.

"What we've been involved with has been coincidence after coincidence," said Chris Erb, senior product manager for the Madden game. "We've just had a string of bad luck."

In 2003, cover athlete Michael Vick broke his leg just one day after the game hit the shelves. He played in only five games that season. The year before, St. Louis Rams running back Marshall Faulk -- who had five straight 1,000-yard seasons -- injured his ankle after appearing on the cover. He ran for 953 yards that season and hasn't hit the 1,000-yard mark since. Gracing the cover of the 2002 Madden game meant a below-average year for Minnesota Vikings quarterback Daunte Culpepper. In the season he appeared on the cover, he threw fewer touchdown passes and had a worse quarterback rating than the season before.

"I know Mike and Daunte, and we talk about different things, and the cover thing is nothing that they ever brought up," McNabb said five months ago. "I'm just not worried about it."

McNabb's performance hasn't impacted sales of the game. This year's edition has already sold 3 million copies, on pace to top last year's record of 5.5 million copies. New copies of the Madden game made for Xbox 360, with McNabb on the cover, hit stores Thursday. A publicity tour scheduled for this week was canceled in light of his surgery.

The curse also hasn't affected EA's ability to find the right NFL player for the cover.

"We're looking for our next cover guy already and we won't have a problem," Erb said. "Being on the cover of our game is still one of the best endorsement opportunities."

Said McNabb's agent, Jim Spinello: "I wouldn't discourage other clients from being on the cover."

Baltimore Ravens linebacker Ray Lewis and former Tennessee Titans running back Eddie George graced the cover for the 2005 and 2001 versions, respectively, and had successful seasons without injury. Before that, Madden himself was on every cover since the popular game's debut in 1989.