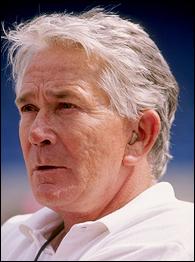 Carson, who had been ill with emphysema, died at his home, according to his wife's employer, TV station WWSB.

Carson was the Steelers' defensive coordinator from 1972-77, and shaped a defense led by Joe Greene, Jack Ham and Jack Lambert into one of the best in NFL history. During that time, the Steelers won
two Super Bowl titles under coach Chuck Noll, and would go on to
win another two after Carson left.

Carson then became defensive coordinator of the Los Angeles
Rams, who lost to the Steelers in the Super Bowl after the 1979
season. He coached the Browns in 1989-90, posting a 11-13-1 record
in 1½ seasons.

Cleveland won the AFC Central in his first season, beating
Buffalo 34-30 in the playoffs before losing to Denver 37-21 in the
AFC championship game. He was fired the next year when the team got
off to a 2-7 start.

"Bud was an eccentric guy that we respected very much and as a
result we played hard because we liked Bud," said former Browns
wide receiver Brian Brennan. "We had an older team and Bud treated
us like men, and because of that he got the most out of us."

"Sometimes he would make things up on the fly," Brennan said.
"We would practice something all week, and at halftime Bud would
say, 'Let's try this.' He liked to do things a little
differently."

Colts coach Tony Dungy, an NFL player in the late 1970s, recalls
marveling at how Carson could make major adjustments in personnel
and strategy in the middle of a game or a season.

"If anyone can come up with something, it's Bud," Dungy said,
pointing to how Carson successfully put in a new and complicated
defensive alignment for a key game with Dallas in 1979.

"You look at what he established when he was with Pittsburgh,
the style of defense they played in the championship they won,"
said Marty Lyons, a defensive tackle with the Jets during Carson's
tenure there. "Wherever he went, he always had that aggressive
style. He didn't want to let the offense feel like they had an
upper hand on the defense. It was always an attack mode."

Carson had some of the best defensive players in NFL history on
the 1974 and 1975 Steelers teams that won the Super Bowl, but
didn't hesitate to motivate them. He pulled future Hall of Fame
cornerback Mel Blount from the AFC championship game against
Oakland in January 1975 because he felt Blount wasn't playing up to
his ability.

"That was a stupid answer," Blount said before the Steelers
beat Minnesota in the Super Bowl, criticism that caused a major
stir in Pittsburgh. "I don't think smart coaches would've done
something like that."

The Steelers were so uncertain about Blount's future after that,
they drafted defensive back Dave Brown of Michigan in the first
round and put him behind Blount on the depth chart.

Blount responded by making 11 interceptions in 1975 and winning
the NFL Defensive Player of the Year award, and Brown wound up with
the expansion Seattle Seahawks.

Carson's work with what is widely regarded as the best defense
in NFL history was praised even after he left the Steelers, which
rankled some holdover members of Noll's staff. Woody Widenhofer,
who became the Steelers' defensive coordinator in 1979, said the
defense was better after Carson left because it was more complex
and relied more on blitzing.

"This isn't that little architect's defense," Widenhofer said.
"He didn't know anything about defense until he got with Chuck
Noll."

Still, the Steelers were so concerned about Carson's knowledge
of their defense before the Super Bowl in January 1980 that they rotated linebackers Loren Toews and Robin Cole on every play so Carson couldn't steal their defensive play calls from the
sidelines. The Steelers won 31-19 for their fourth and final Super Bowl victory.

Carson was a defensive back at North Carolina from 1949-51
before spending two years in the Marines.

Visitation will be Monday night at Toale Brothers Funeral Home
in Sarasota with services Tuesday at First United Methodist Church.