Friday night, ESPN.com learned Umenyiora had followed up the first Pro Bowl selection of his career earlier this week by agreeing to a landmark six-year contract extension.

The extension, which runs through the 2012 season, totals just under $41 million and includes $15 million in guarantees. The three-year veteran, who is second in the league in sacks with 12½, will make about $21 million in the first three years of the contract.

The deal, negotiated by the Manhattan-based agency Sportstars -- where Brian Mackler, Alan Herman, James Ivler and Jason Chayut are the principal representatives -- will be officially executed in the next few days.

The guaranteed part of the contract is believed to be the largest ever awarded to a three-year veteran.

"The Giants have always demonstrated a proactive stance with their talented, young players and this is the latest example of their approach," said Mackler, who was the point man in negotiations, but declined to discuss specifics of the contract. "This moves Osi into a category with the most elite ends in the game, and that's saying something for a player who hasn't even completed his third season yet." 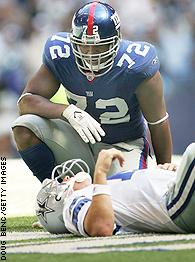 Umenyiora, 25, has emerged over the last season and a half as one of the NFL's premier young defenders. His newfound stardom was punctuated on Wednesday as he joined Giants teammate Michael Strahan as two of the three ends chosen to represent the NFC in the annual Pro Bowl game.

A former Troy State standout, Umenyiora moved into the starting lineup at the midpoint of last season, when starter Keith Washington was injured. He started seven of the last eight games and registered seven sacks and four forced fumbles.

This season, Umenyiora has been even better, establishing a career best in total tackles, with 64, to go along with his 12½ sacks. He has four multi-sack games in 2005, at least one sack in nine of 14 contests and 19½ sacks in his last 25 appearances, dating to 2004. For his career, Umenyiora has 141 tackles, 20½ sacks, seven forced fumbles and also six fumble recoveries.

New York general manager Ernie Accorsi felt so strongly about Umenyiora's potential that he refused to include him in the trade package the Giants sent to San Diego in 2004 to obtain the rights to quarterback Eli Manning. In training camp this summer, Accorsi reiterated to ESPN.com that he would have allowed the Manning deal to collapse rather than send Umenyiora the Chargers, where San Diego coaches wanted to utilize him as a hybrid linebacker-end in their 3-4 scheme.

The Giants were able to acquire Manning without sacrificing Umenyiora and, as a result, gained not only a franchise-type quarterback but retained a superb young defender.

Born in London to parents of Nigerian descent, Umenyiora played at Auburn (Ala.) High School. Although he desperately wanted to attend Auburn University, he was not heavily sought by major programs and was essentially a recruiting afterthought by the Troy State coaching staff.

He was chosen by the Giants in the second round of the 2003 draft, the 56th player taken, and signed a four-year, $2.53 million contract with a $1.165 million signing bonus. Without the extension, that four-year deal would have expired following the 2006 season.