MINNEAPOLIS -- The Minnesota Vikings became an embarrassment
on Mike Tice's watch, with a ticket scalping scandal, the infamous
lake cruise and a Whizzinator somewhere in between.

There weren't enough wins to cover up the ugliness, and now Tice
is out of a job.

Owner Zygi Wilf fired Tice after Sunday's victory over Chicago
capped a disappointing 9-7 season in which the Vikings, a trendy
preseason pick to go to the Super Bowl, missed the playoffs.

The news wasn't a surprise, but the timing and manner in which
it was delivered stunned the few players remaining in the stadium
Sunday.

Several players and sources close to Tice told ESPN.com's Len Pasquarelli that the dismissal came well after the coach had addressed his players and the media. Tice went to his small office near the home locker room at the Metrodome, where he was joined by Wilf and Wilf's brother Mark, a minority stockholder in the club, who apprised him of their decision not to renew his contract.

The dismissal also came after Tice had spent much of last week trying to have Wilf discuss his job status.

That Tice could not directly inform most of his players, many of whom had departed the locker room by the time the firing was announced, disappointed him.

A team executive issued a two-paragraph press release to
reporters in the Vikings' locker room after most players had gone
home.

Pro Bowl kick returner Koren Robinson had to compose himself
before commenting, managing a "Whoa, that's crazy," while he read
the statement at his locker.

After a Week 8 loss to the Panthers, Tice saw his approval rating drop to a measly 9 percent. But winning seven of nine to close the season shot Tice back into positive territory. A win over the Bears in the season finale registered a 52 percent rating. Alas, Vikings owner Zygi Wilf had the only vote that mattered. (Vote)

"In the locker room? Right after a game you just won?"
Robinson said. "Give the man respect enough to wait until Monday
to enjoy the win at least."

Pro Bowl safety Darren Sharper crumpled up the release and threw
it on the floor before declining comment and running back Mewelde
Moore also tersely declined comment.

Tice, who compiled a 33-34 overall
record -- including a 1-1 mark in the postseason -- had already addressed the media before the move was made
public. Reporters waited for him long after the game was over, and
the coach wore a good-natured smile and showed no bitterness about
the way the situation was handled. 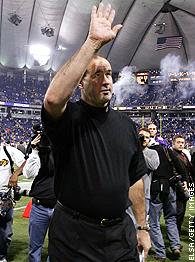 Tice was one of three NFL coaches to go following Sunday's
games; Dick Vermeil announced his retirement in Kansas City, and sources told ESPN's Chris Mortensen and The Associated Press that the
Houston Texans planned to fire Dom Capers.

Tice's tenure was mostly marked by streaks and scandals.

A $100,000 fine was levied last summer against him by the league
for scalping his Super Bowl tickets and running back Onterrio Smith
was caught at the airport with a device designed to beat drug tests
dubbed the "Original Whizzinator." But perhaps the biggest blow
came with revelations of a wild boat party during the team's bye
week this season that produced misdemeanor charges against four
players.

Tice's Vikings were inconsistent on the field, prone to long
winning streaks and big collapses. Minnesota started 6-0 in 2003
and 5-1 in 2004 before going 3-7 over the final 10 games of both
seasons. After starting 2-5 this year, the Vikings won six
straight, then lost two in a row to fall out of contention for the
playoffs.

"After significant evaluation, we feel that now is the time to
make a coaching change," Wilf said in the statement.

Wilf had said previously that Tice's job status would be
discussed at the team's headquarters on Monday, but shortly before
7 p.m. central time, the release was issued. The owner was gone by
then and he scheduled a press conference for Monday afternoon.

Tice has lauded the Wilf family for the support they've shown
since purchasing the franchise from Red McCombs last summer. He
also spoke glowingly of his 13 years in Minnesota, which began as a
tight end in 1992 and progressed from tight ends coach to offensive
line coach to a somewhat surprising promotion to head coach after
Dennis Green was fired in January 2002.

"I don't know who was more shaken by it, him or me," Tice said
of an emotional meeting with Wilf that happened after he spoke to
the media about Sunday's 34-10 victory over the Bears.

"Of course I'm hurt. I'm a man, not a machine," Tice said. "I
put a lot of time into this organization, and had a lot of good
times, and some bad times."

His lone regret was that he had to call his wife, who was being
asked about the rumors in the Metrodome parking lot, to inform her
of the news.

"I would've liked to savor the victory," Tice said.

He exited the Dome with a smile on his face and his head held
high, not knowing what the future holds. He has a son who will be a
senior in high school next year and he said he will make a decision
with that in mind first.

Asked if he will coach again, Tice paused before saying, "Yeah,
if the right job comes up."

His immediate plans were a little clearer.

"Go home and let my wife cry on my shoulder, I guess."