GREEN BAY, Wis. -- Even as losses and injuries mounted
during the worst Green Bay Packers season in 15 years, Mike Sherman
wouldn't publicly plead his case to keep his job. 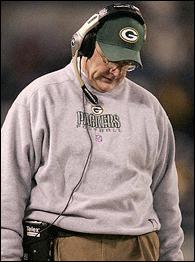 When prodded, Sherman said only that he hoped the team's
management would take into account everything he accomplished in
six seasons, not just this year.

They did -- and still reached the same conclusion: Sherman had to
be fired.

Packers general manager Ted Thompson fired Sherman on Monday and
said it wasn't because of the team's 4-12 record. Thompson simply
isn't convinced Sherman is the right person to carry the team into
the future, which might not include Brett Favre.

"I think our team hung in there very well and played under some
very difficult circumstances and played hard each and every week,"
Thompson said. "This was more thinking in terms of where we are
and where we need to get to."

Thompson said Sherman, who signed a two-year contract extension
in August, was surprised and disappointed when he learned of the
decision early Monday morning. Sherman did not immediately return a
telephone message left by The Associated Press. The team announced
Sherman would be available to news media at 11 a.m. Wednesday.

But Thompson said he had not discussed the decision with Favre.
The three-time MVP is mulling retirement and has said he might be
less willing to return if he had to learn a new offensive system
and work with a new coaching staff.

Thompson said he wants Favre back, but he needs a coach who will
bring the team long-term success.

"Eventually Brett Favre's going to retire and go back to
Mississippi," Thompson said. "But that didn't have any sway in
this particular decision."

"From a physical standpoint I don't think he's any less of a
player than I've seen in the past," Thompson said. "I think ...
there were games where he made some decisions that I am sure he
wished he could have a do-over."

Favre, 36, has hinted the team's offseason moves would play a
role in his retirement decision. And Thompson doesn't sound willing
to load up on high-priced free agents for one last playoff run with
Favre. He said he believes in rebuilding primarily through the
draft and called free agency "dangerous waters."

Favre did not speak to the media after Sunday's game. His agent,
Bus Cook, did not immediately return a telephone message.

It has been a rough year all around for the Packers and Mike Sherman has felt the heat. After the first win of the season in Week 5, Sherman's approval rating was at 46 percent. He would climb to 60 percent after a Week 10 win, but Sherman's final rating after a Week 17 win was a familiar 46 percent. (Vote)

Packers defensive end Kabeer Gbaja-Biamila said Sherman
addressed the team for about 15 minutes after his firing. Players
gave him a standing ovation.

"I did not see it coming," Gbaja-Biamila said. "I thought we
handled this -- Coach Sherman and the rest of us -- handled the best
that we could with the hand that was dealt us. We couldn't have
done any better. But that's not what Ted Thompson [is] looking
at."

"Mike was a great guy and I know he'll be coaching somewhere
else," Jackson said. "Wherever he goes, I won't mind playing for
Mike Sherman. He's just that great of a guy."

Sherman brought success to Green Bay in his first five seasons
and leaves with a 59-43 record. But he didn't deliver another
championship to Titletown.

Sherman won three consecutive division titles for only the
fourth time in team history -- joining Vince Lombardi, who did it
twice (1960-62, 1965-67) and Mike Holmgren (1995-97). The other two
coaches won Super Bowl titles. But his Packers teams were 2-4 in
the playoffs and never made it to the NFC championship game.

Thompson said he didn't regret giving Sherman a two-year
contract extension before the season: "Based on his record in the
past, I think he deserved that vote of confidence."

Thompson said he would begin interviewing head coaching
candidates this week, and the list could include the team's
defensive coordinator, Jim Bates. Thompson did not fire Sherman's
assistants Monday.

Thompson said he wasn't concerned about trying to find a new
coach at a time when several other NFL coaching jobs are open. At
least six other teams are looking for new coaches, including the
Detroit Lions and Minnesota Vikings, the Packers' rivals in the NFC
North.

Thompson said the decision to fire Sherman was a difficult one.

"It's not an easy thing for anyone to do," Thompson said.
"Mike Sherman's a good man."