COLUMBUS, Ohio -- While some of Maurice Clarett's
ex-teammates slept off the celebration of their latest Fiesta Bowl
victory, the former Ohio State running back shuffled into a
courtroom Tuesday in handcuffs and jail-issue clothing to face
robbery charges. 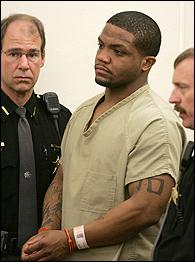 He posted bond and was released later in the day.

Clarett, who led the Buckeyes to the national championship in
the same stadium almost exactly three years earlier, faced a judge
for the first time since he was accused of robbing two people with
a gun in an alley behind a downtown bar early Sunday.

Wearing a loose-fitting tan shirt, dark pants and sandals,
Clarett did not speak and was not asked to make a plea. The
22-year-old Clarett was released from Franklin County jail early
Tuesday afternoon after posting $50,000 bond, a sheriff's deputy
said.

Each of the two charges of aggravated robbery carries a possible
sentence of three to 10 years, with another one to three years
added to each because a gun was used.

"We are looking forward to investigating the allegations,"
Clarett's attorney, William Settina, said outside court. "That's
all I can say."

According to a police report, Clarett flashed a gun and demanded
property from a man and a woman behind the Opium Lounge in downtown Columbus early Sunday morning. He fled with two men in a sport
utility vehicle after he was identified by the bar owner, who
happened to come out into the alley; no one was injured, and only a
cell phone was taken from the alleged victims, police said.

Clarett's next hearing is set for Jan. 12.

Police had been looking for him for the better part of two days
before he turned himself in shortly after Ohio State beat Notre
Dame 34-20 in the Tostitos Fiesta Bowl in Tempe, Ariz., on Monday night.

USA Today's national offensive player of the year as a senior at
Warren G. Harding (Ohio) High School, Clarett rushed for 1,237
yards and scored 16 touchdowns as a freshman in 2002.

It was Clarett who, as a star freshman tailback, had scored the
final touchdown on Jan. 3, 2003, in the same bowl to give the
Buckeyes a 31-24 upset of top-ranked Miami in double-overtime. The
victory gave Ohio State its first national championship since 1968.

Clarett's fortunes have changed dramatically in the three years
since he scored on that five-yard run.

In the summer of 2003 he reported he had lost more than $10,000
in clothing, CDs, cash and stereo equipment when a car he had
borrowed from a local dealership was broken into. Police later
determined that he lied about the theft. He pleaded guilty to a
misdemeanor.

The investigation led to Ohio State suspending Clarett for
misleading investigators, and for receiving special benefits worth
thousands of dollars from a family friend.

Clarett dropped out of Ohio State, then challenged the NFL's
requirement that players wait three years after high school before
turning pro. The case went all the way to the Supreme Court before
Clarett lost.

In an interview with ESPN The Magazine in November 2004, Clarett
said coaches and boosters arranged for him to get passing grades,
cars and thousands of dollars while at Ohio State. None of the
allegations was verified, and Clarett never responded to NCAA
requests to be interviewed as part of its investigation into Ohio
State's athletic program.

After two years in limbo, he was taken in the third round by the
Denver Broncos in last year's draft, but the team cut him in
August.

Buckeyes coach Jim Tressel said the day before the Fiesta Bowl
that he had recently spoken with Clarett about playing in Europe.

"As I said the last few times people have brought up the
subject, my hope would be that he would have an opportunity to go
over to NFL Europe and make a comeback," Tressel said Sunday.

Before the incident, Clarett was negotiating a deal with an NFL team, Josh Luchs, one of Clarett's agents, told ESPN The Magazine's Tom Friend. Clarett was expected to be allocated to NFL Europe if he signed, Friend reported.


Information from The Associated Press was used in this report.