Lovie Smith is in the company of Hall of Famers.

Smith was hired to resurrect the proud Chicago Bears franchise
once coached by George Halas and Mike Ditka. He did such a strong
job in 2005 that he was chosen The Associated Press NFL Coach of
the Year on Saturday. 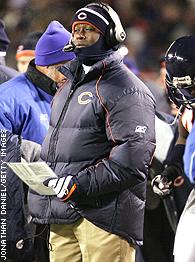 Halas and Ditka each won the honor twice. In his second season
with the Bears, Smith took them from 5-11 to 11-5, the NFC North
title and a first-round bye.

"Each day I'm living a dream to even be talked about with those
guys," Smith said. "I'm blessed to be a Bear. Each day I realize
that, and it seems like more and more I realize that."

Smith also beat out his mentor, Indianapolis coach Tony Dungy,
drawing 24½ votes from a nationwide panel of 50 sports writers and
broadcasters who cover the NFL. Dungy was next with 20½.

"I would have voted for Tony for the award," Smith added.
"I'm really happy for our assistant coaches, to get that award.
Tony did a great job with his program, as a lot of other coaches
did."

Chicago had the league's stingiest defense, which figures
because Smith made his reputation as a defensive mastermind, first
in Tampa Bay under Dungy, then in St. Louis.

Now, he oversees a team that surged to a Super Bowl contender,
armed with a defense that allowed only 202 points, just 61 of those
at home.

"I definitely get the sense this is the Bears' year," he said.
"We have a special group of athletes, a special team with
character. We have a great team chemistry. Whatever it is the good
teams have that make a run, I just think that this team has it."

Smith, who served as Dungy's linebackers coach from 1996-2000 in
Tampa, recently attended the funeral of James Dungy, his close
friend's oldest son, who died last month. Their bond remains strong
and Smith often has credited Dungy with helping develop his
leadership skills.

"Lovie, when we went out and started our search for a head
coach, it starts with leadership," Angelo said. "And (with) Lovie
there've never been any doubts about that. I knew that firsthand. I
had the benefit of working with him down in Tampa and saw that come
to fruition even more so now that he's in charge."

Smith, who moved from defensive coordinator of the Rams to the
Bears, chose Ron Rivera to coordinate the defense, but remains
heavily involved with a unit sparked by Defensive Player of the
Year Brian Urlacher. Chicago gave up 24 points in a loss to
Cincinnati in Week 3, but otherwise never yielded more than nine
points at Soldier Field in going 7-1 at home.

Rivera has become a prime candidate for some of the head
coaching openings this month.

"You most certainly do have to say he is coach of the year,"
Rivera said. "We were supposed to be 3-13 according to a lot of
people. We were supposed to the 32nd-ranked team, and he got us to
believe in ourselves and believe in each other. It's tremendous. To
accomplish what we did this year and not have a lot of people
behind us is a great testament to his belief in the players, the
team and the systems we have."

Urlacher thinks Smith deserved the award because of how the
offense remained together -- if ordinary -- when quarterback Rex Grossman was hurt in the preseason, then running back Cedric Benson, the fourth overall draft choice, held out, contributed
little, and hurt his knee during the season.

"I realize a lot of other teams have had great seasons -- when
you look at Tony Dungy and they were 14-2," Urlacher said.
"Marvin Lewis did a great job at Cincinnati. But you look at what
we had to deal with.

"Our starting quarterback went down. He had to bring along a
rookie quarterback (Kyle Orton) who won 10 games for us. It seems
like he always made the right moves.

"When we started out bad, 1-3, he never gave up on us, never
changed the way he spoke to the media and to the team. I have so
much respect for the guy just because of the way he is, the way he
treats everyone."

A good omen, perhaps, for Smith: Chicago won the NFL
championship in '63 and '85, the first seasons Halas and Ditka,
respectively, took the award. The six total Coach of the Year
awards are the most for any franchise.