HOUSTON -- The Houston Texans will hire Denver offensive
coordinator Gary Kubiak to take over the worst team in the league
and help decide what to do with the first pick in the draft. 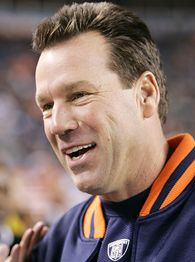 Texans owner Bob McNair said during a Sunday news conference
that the hiring won't be completed until later in the week because
the Texans could not negotiate a contract with Kubiak until the
Broncos were eliminated from the playoffs.

McNair's announcement came about an hour after Denver lost to
Pittsburgh in the AFC championship game.

"Hopefully we'll have him down here by the middle of the week
and he will then be assembling a staff," McNair said.

McNair said he planned to speak with Kubiak later Sunday.

There's been speculation for weeks that Kubiak would become the
Texans' second coach, replacing Dom Capers.

Capers was fired a day after Houston finished its season 2-14.
He had led the team since its inception four seasons ago.

Houston won four games in its first season, five in 2003 and
seven last season before its 2005 meltdown.

Kubiak has been a highly regarded coaching prospects for several
years, but this will be his first head coaching job at any level.
He spent the last 11 years with Mike Shanahan in Denver, helping
the team to back-to-back Super Bowl wins in 1998 and 1999.

"To lose him is going to be tough," Broncos quarterback Jake
Plummer said. "He really helped me step up in my career. We'll
miss him but at the same time you're excited for him. He deserves
it and he's a great football coach."

McNair said the improvements Plummer made under Kubiak's
tutelage were a big draw.

"They've made great strides in improving the performance of
Jake Plummer and I think Gary's responsible for that," he said.

The Texans formally interviewed four offensive coordinators and
six total candidates, but Kubiak was the front-runner from the
beginning. It certainly didn't hurt that he played in Denver for
Dan Reeves, who is working for Houston as a consultant to McNair.

McNair said he chose Kubiak because he wants to revive Houston's
sagging offense, which was ranked 30th in the league and managed
just 253.3 yards per game in 2005.

"I think that the biggest challenge that we have is from the
standpoint of putting together an effective offense," McNair said.
"We've had difficulty with that process in the past."

Kubiak will have to immediately get to work on helping the team
decide what to do with its No. 1 pick in April's draft.

A Broncos source told ESPN's Chris Mortensen last week that the Texans told USC that Reggie Bush would be selected with the No. 1 pick, despite a rise in public sentiment after the Rose Bowl that Houston select Texas quarterback Vince Young.

That assurance was given because it was in line with Kubiak's philosophy.


Kubiak, a Houston native and former Texas A&M quarterback,
played for Reeves and backed up John Elway from 1983-91. His NFL
playing career was mostly forgettable, although he played in 11
postseason games and had a 4-1 record as a starter.

He returned briefly to coach at his alma mater -- in College
Station, about 90 miles from Houston -- then joined Shanahan on
George Seifert's staff in San Francisco in 1994. With Shanahan as
the offensive coordinator and Kubiak as the quarterbacks coach, the
49ers won the Super Bowl and Steve Young was named the MVP.

Shanahan became the Broncos' coach the following season and took
Kubiak with him. Since then, the Broncos have had one of the
league's top 10 offenses in 10 of 11 seasons. The Broncos ranked
fifth in total offense in 2005.

Kubiak was a candidate for the job the first time around and was
interviewed in 2001 before the Texans picked Capers.

McNair said Kubiak was much more prepared for the interview this
time and that he was "very impressive." He said he told Kubiak
after the 2001 interview that he thought he needed "a little more
experience" before he became a head coach.

McNair said Kubiak recently told him: "'You were right back
then, but I can just tell you I'm ready now.'"

"And I thought he was," McNair said.