Super Bowl-bound Pittsburgh Steelers quarterback Ben Roethlisberger has made a big name for himself, and not just on the football field. He's also quickly becoming a force in the marketing world.

Just ask the locals who trust his taste in meat and the sauce that accompanies it.

PLB Sports in Pittsburgh has sold 200,000 packets of Roethlisberger's Big Ben Beef Jerky, while Roadside Ribs has peddled 17,000 bottles of his Big Ben's BBQ Sauce. (There's spicy and mild, and a wing sauce is on its way in March.)

Then there's Jeff Trebac, owner of three Peppi's restaurants in Pittsburgh, who says he has sold thousands of "Roethlisburgers" -- a concoction of ground beef, sausage, scrambled eggs, grilled onions and American cheese -- since he dreamed up the sandwich in October 2004.

"We had a car of Steelers fans who said they drove from Washington, D.C., just to get the sandwich," Trebac said.

Just two years into his career, Roethlisberger already is on his way to becoming an NFL icon, and a Super Bowl victory at the age of 23 could very well put him at the top of the league's list.

His endorsement contract from Nike, along with licensing royalties from a T-shirt, a button company, the beef jerky, barbecue sauce and Fathead -- a high-end wall poster -- will yield him millions in off-the-field earnings this year.

An informed industry source told ESPN.com that Roethlisberger will be one of the few NFL players to earn more than $1 million from Reebok in jersey royalties this year. He ranks second in jersey sales behind Oakland's Randy Moss, according to the numbers on NFLShop.com; and he also ranks No. 2 in women's jersey sales behind Philadelphia Eagles quarterback Donovan McNabb -- ahead of the likes of Tom Brady, Brett Favre and Peyton Manning.

Many sports marketers say they believe Roethlisberger will become the next "It" guy in the endorsement world if he leads the Steelers to an impressive win in the Super Bowl on Feb. 5.

"I don't think there is any player in the game who will benefit more from a big performance and a Super Bowl title than Ben Roethlisberger," said Scott Becher, president of Sports & Sponsorships, a sports marketing firm. "Coming into the game, he's got this youthful swagger, and he can parlay that for years to come with a win. He's got a chance to do what Dan Marino was unable to do in his only Super Bowl appearance."

Stars who ascend as fast as Roethlisberger has often restrict themselves to associations with blue-chip companies only. Part of the charm of Roethlisberger's portfolio is that he is doing deals with little guys like Stan Kramer.

Last year, Kramer came to Roethlisberger's agent, Ryan Tollner, expressing an interest in making Roethlisberger buttons. Kramer said he had a small business but wanted to make pins that would retail for $1. Most marketers, let alone the players themselves, would never listen to a pitch that small; Tollner did, and told Roethlisberger about it. The quarterback thought it was a good idea.

"Ben told me that he didn't care if he made a dime off the buttons," Tollner said. "He was just hoping that putting his name to it would help make this guy a buck."

Kramer said that sales have been up the last few weeks, but that "when Ben got hurt this year, there weren't many people asking for them." 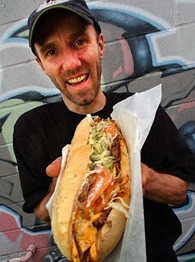 In the 2004 NFL draft, Roethlisberger slipped to the 11th pick; but with the Steelers in Pittsburgh, he immediately was welcomed into a blue-collar, family-atmosphere city and a franchise that has fans all over the world.

"We've received orders from a military base in Germany, and we've had Steelers fans from Wisconsin ask us if we can overnight them some beef jerky for their party," said Ty Ballou, president and chief executive of PLB Sports. "It's only four ounces of dried beef; but if they are Steelers fans and it has Ben on the package, they gotta have it."

John Kosko, owner of Roadside Ribs, said that sales of Big Ben BBQ sauce are brisk, and "it's not even barbecue season." Kosko's company is selling a gift pack of both sauces for $10.

Given Roethlisberger's popularity, his agents have been monitoring the use of his name without his permission. To cut down on the unlicensed T-shirt business, Roethlisberger signed a deal with a company called Fanatics Only, which makes his official T-shirts. Many of which feature his signature and Web site on the front. Within a few days of the Steelers' 21-18 victory over Indianapolis in the AFC playoffs, the company sold more than 50,000 T-shirts that say "The Tackle," a reference to Roethlisberger's tackle of Colts cornerback Nick Harper, a stop that saved the Steelers' postseason.

Meanwhile, Roethlisberger's relationship with Peppi's is showing some strain. As long as the $7 sandwich was a quality product and a portion of Peppi's profits from it went to a charity of Roethlisberger's choice, Tollner said the quarterback allowed the restaurant to use his name without paying a licensing fee.

But so far, Trebac says no money has been donated to charity and the franchise was asked to stop selling its "I tackled the Roethlisburger" T-shirts.

"We're working on the charity aspect," Trebac said. "We want to donate something to a cause of his choice, but we'll wait until after the Super Bowl to contact them."

Prices for Roethlisberger collectibles also have skyrocketed (stores in Pittsburgh sell autographed jerseys and footballs for $400), in part because he has limited his signings this year to concentrate on football. That could also boost his value when he finalizes an exclusive autographed memorabilia deal later this year.

Just to test the marketplace, Roethlisberger is auctioning off his game-used signed cleats from his first "Monday Night Football" game -- a 24-22 win over the Chargers on Oct. 10, 2005. Last week, one of the shoes sold for $2,500; the other is currently being auctioned on his Web site.

Tollner said his client has plenty of marketing opportunities ahead of him. Roethlisberger is looking at endorsements in the automotive, financial services, sports drinks and soft drinks categories.

"This is a person who embodies the good fundamental values of America," Tollner said. "He looks the part, he acts the part and he believes the part. He has an element of toughness and humility, and he loves to be the underdog. He has played that role all the way to the Super Bowl."

And if Roethlisberger leads the Steelers to their first Super Bowl victory in 26 years, everything the man does could turn into a marketing moment, including his facial hair. His beard, a product of a winning-streak superstition, might even be for sale, and maybe as soon as 24 hours after the game.

Said Tollner: "There's definitely interest from razor companies. We can guarantee he'll at least shave it down to a goatee."