The amazing athletes of the National Football League -- bigger and
stronger than ever before -- are dying young at a rate experts find
alarming, and many of the players are succumbing to ailments typically
related to weight.

The heaviest athletes are more than twice as likely to die before
their 50th birthday than their teammates, according to a Scripps
Howard News Service study of 3,850 professional-football players who
have died in the last century.

Most of the 130 players born since 1955 who have died were among
the heaviest athletes in sports history, according to the study.
One-fifth died of heart diseases, and 77 were so overweight that
doctors would have classified them as obese, the study found.

The bone-crushing competitiveness of professional football is
spawning hundreds of these behemoths -- many of whom top the scales at
300 pounds or more -- and the pressure to super-size now extends to
younger players in college and even high school.

The trend lines are even more disturbing.

Twenty years ago, it was rare for a player to weigh 300 pounds. But
more than 500 players were listed at that weight or more on NFL
training-camp rosters this summer -- including San Francisco 49ers
guard Thomas Herrion, who collapsed and died after an exhibition game
in August.

The relatively recent explosion in the number of 300-pound linemen
"presents a frightening picture in terms of what we might expect 20
years from now," said Dr. Sherry Baron, who studied the issue in 1994
for the National Institute for Occupational Safety and Health. 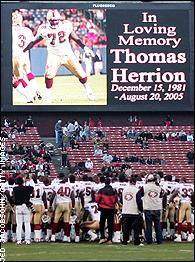 Baron's study, conducted at the request of the NFL Players
Association, found that while players generally weren't dying sooner
than average, offensive and defensive linemen had a 52 percent greater
risk of dying from heart disease than the general population.

The Scripps Howard study suggests that the risk for those heaviest
players is increasing, although exact comparisons to the general
population were impossible to make because so many factors -- heredity,
sedentary lifestyles, eating habits, as well as size -- contribute to
heart disease.

"We know that the body mass index levels have shifted since our
1994 study," Baron said. "More [football players] now would be
considered obese."

Scripps Howard was able to compare mortality rates for
professional-football players with the 2,403 Major League Baseball
players who have died in the last century. The comparison found that
football players are more than twice as likely to die before age 50.
Asked to speculate on the cause for this difference, experts noted
that football players generally are heavier than baseball players.

The threat isn't lost on retired players, who acknowledge that they
are spooked by the potential problems they now face.

"Do you see any oversized animals anywhere in the world living a
long life?" asked Tony "Goose" Siragusa, a 340-pound defensive
tackle for 12 seasons with the Indianapolis Colts and Baltimore
Ravens. "We're pretty much on our own here."

The Scripps Howard study tracked the deaths of 3,850 pro-football
players born since 1905. Medical examiners and coroners were contacted
to determine the causes of death for the 130 players who died before
age 50. The study found: