In the deadly serious business of sports, a cartoon character from 1927 played a role in Al Michaels' hop from Monday Night Football to NBC.

ESPN picked up rights to Ryder Cup matches (along with paying a rights fee), Olympics highlights, historic cartoon character Oswald the Lucky Rabbit and more while NBC acquired the services of Emmy-winner Michaels for its Sunday night games it was announced Thursday.

Walt Disney produced 26 Oswald cartoons in 1927, but Universal distributed the series and owned the rights to the character, prompting Disney to develop Mickey Mouse.

"As the forerunner to Mickey Mouse and an important part of
Walt Disney's creative legacy, the fun and mischievous Oswald is
back where he belongs, at the home of his creator and among the
stable of beloved characters created by Walt himself," Disney
president Robert Iger said after Thursday's announcement.

"He told me this incredible story that Walt's first really big
production as a cartoonist for the cinema had been a character
called Oswald the Lucky Rabbit, which was before Mickey," Ebersol
said. "And for reasons that aren't still totally clear to me, Walt
lost those rights. He didn't have the money to hold onto them."

NBC takes over Sunday night next season from ESPN, which will broadcast Monday Night Football. John Madden, Michaels' partner for the last four seasons, agreed in June to a six-year contract with NBC.

Besides Madden and Michaels, NBC will have Bob Costas and Cris Collinsworth as co-hosts of the network's studio show.

"When we made the deal with the NFL this spring, there were four key stars I knew I wanted to build our football team around, but I wondered from the beginning, if I would be lucky enough to get them all," Ebersol said in a statement Thursday.

To get the final piece of Ebersol's team, NBC gave ESPN broader access to the Olympics, Ryder Cup golf, Notre Dame football, the Kentucky Derby and the Preakness.

And, of course, Oswald. 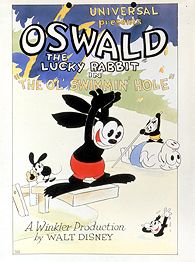 "Oswald is definitely worth more than a fourth-round draft
choice," Michaels said, referring to what the Kansas City Chiefs
gave the New York Jets as compensation for releasing coach Herm
Edwards from his contract. "I'm going to be a trivia answer
someday."

The Walt Disney Co. had been trying to reacquire the rabbit for
some time.

"When Bob was named CEO, he told me he wanted to bring Oswald
back to Disney, and I appreciate that he is a man of his word,"
Walt Disney's daughter Diane Disney Miller said in a statement.
"Having Oswald around again is going to be a lot of fun."

• Rights to broadcast live Friday coverage of the Ryder Cup golf championship between the United States and Europe in 2008, 2010, 2012 and 2014, as well as the right to re-air NBC coverage and extended highlights. ESPN paid a rights fee to televise the event.

• Expanded Olympics highlights from this year through 2012.

• Expanded highlights from Notre Dame football, the Kentucky Derby and the Preakness through 2011.

When the Monday games move to ESPN next season, retired quarterback Joe Theismann, Washington Post columnist Tony Kornheiser and Mike Tirico will be in the ESPN booth.

Michaels had been with ABC since 1976 and had been the play-by-play voice of Monday Night Football since 1986, when he replaced Frank Gifford.