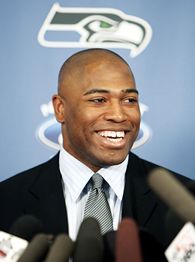 He didn't run hard between the tackles. He avoided hits. He wouldn't block blitzing linebackers or catch passes out of the backfield.

Seahawks president Tim Ruskell heard it all but never let it influence his opinion of the Pro Bowl running back. Ruskell wanted to see Alexander for himself during the 2005 season and determine his future value to the Seahawks.

Alexander became the NFL MVP and his reward was the richest contract for a running back in NFL history: an eight-year, $62 million deal with the NFC champions he signed Monday.

"We all know Shaun can score touchdowns and rush for a lot of yards, and that's a great thing for a running back. But we talked ... about the little things," Ruskell said during a news conference at team headquarters.

"To Shaun's credit, he improved in all of those areas, and that's a credit to him and that's another big reason while we are here today."

Alexander's agent, Jim Steiner, told The Associated Press on Sunday night that the contract includes over $15.1 million in guaranteed cash, through signing and other bonuses and 2006 base salary. The $62 million total exceeds the eight-year, $60 million contract LaDainian Tomlinson signed with the San Diego Chargers in 2004.

"This contract is truly a blessing. To be the highest-paid running back ever is quite an honor," Alexander said. "It's pretty good."

Always jovial, Alexander talked about making multiple Super Bowl trips with the Seahawks. Once a deal was reached Sunday night, Alexander began text messaging with rookie linebacker Lofa Tatupu and talked with quarterback Matt Hasselbeck about getting to next year's Super Bowl in Miami.

But Alexander also acknowledged he probably could have made more by leaving Seattle as a free agent. He consistently stated his intention was to stay put and stuck by his word.

"Everybody knew this is my city," Alexander said. "I wanted to play here, and my goal when I first got here was to do stuff Seattle had never seen before.

"It's really simple. When you have good people and everybody is going after the same things, it's easy to make the decision about coming in."

It was widely assumed Alexander would command over $20 million in guarantees -- given that last offseason Seattle sprang for a $16 million bonus to re-sign Hasselbeck and another $20 million-plus in bonuses to keep perennial Pro Bowl tackle Walter Jones.

Both Steiner and the organization declined to reveal the specific breakdown of the contract, but Ruskell said the contract still keeps the Seahawks in good salary cap position.

Seattle was more than $10 million under the cap before Alexander's deal. The uncertainty with the league's collective bargaining agreement and the twice-postponed deadline for free agency affected the timeline of the deal slightly, but not the terms, Ruskell said.

Alexander was designated the Seahawks' franchise player before last season, then signed a one-year deal for $6.323 million. When he received the franchise designation, Alexander said he briefly thought about his tenure in Seattle ending.

But the running back then ran for a league-high 1,880 yards and scored an NFL-record 28 touchdowns, and Ruskell and the organization responded with a generous offer.

"I wanted to see the relationship with the running back and how everything fit -- the coaches, Shaun, the team," Ruskell said. "I'd have to be blind to say that I couldn't see that's going to work pretty well."

After Seattle's Super Bowl loss to Pittsburgh, team owner Paul Allen, coach Mike Holmgren and Alexander himself all said they believed the franchise's career rushing leader with 7,817 yards over six seasons would remain with the Seahawks.

Alexander was on the road, making appearances in Atlantic City, N.J., and Kansas City in recent days and was about to travel to Alabama when he got the call the deal was complete.

"They said it was time to come home, and I knew what that meant," Alexander said.