Daunte Culpepper's misery in Minnesota has company in, of all places, Green Bay. 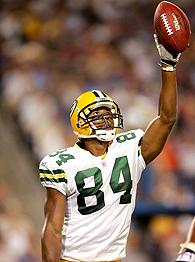 While the Packers await a decision from quarterback Brett Favre about whether he intends to retire or return, wide receiver Javon Walker, who is rehabilitating the right knee he injured in last year's season opener, told ESPN.com on Thursday that he has already informed the Packers of his desire to play elsewhere.

"I just don't feel like this is the best place for me to be right now," said Walker, whose relationship with the organization remains fractured following the team's refusal last summer to renegotiate his contract and public criticism at his expense by Favre. "I really have no interest in being in a Green Bay Packers uniform or playing for Green Bay again."

Citing recent contract squabbles with running back Ahman Green, tight end Bubba Franks, defensive lineman Grady Jackson and cornerback Mike McKenzie, as well as his own, Walker added, "I just don't like the way the organization runs itself. They want players to come up there and play hard and work hard, but when it comes time to be compensated, it's like, 'We forgot what you've done.'"

The source of Walker's bitterness is the team's refusal even to discuss his contract, which at the time had two years remaining, the penultimate year of which paid him $515,000 the season after he made the Pro Bowl by catching 89 passes for 1,382 yards and 12 touchdowns. But Walker, a four-year veteran, says that money is not the issue at this point.

Favre offended Walker when he spoke out against the receiver in his contract dispute, saying he should come to training camp and not hold out. (Walker heeded the advice.) Walker believes Favre's comments made living and working in Wisconsin difficult; Walker tells of one instance when he was in a hotel and an employee announced his presence on an Internet message board for "anyone who had something to say to Javon Walker." It also angered Walker that the team allowed its iconic quarterback to interfere publicly in a teammate's business with management. He held his tongue all year.

"There's an unwritten rule that players stick together," said Walker, still biting his tongue on Favre for the most part.

While Walker is quite adamant about not sticking around in Green Bay for the final year of his contract -- whether Favre returns or not -- he promises not to be a disruption next season, because he doesn't plan to show up at all for training camp.

The rift is so deep and his animosity toward Favre so great that, Walker said, he is even willing if necessary to repay the Packers the prorated portion of his signing bonus, which amounts to around $850,000.

"Why should I risk another year of getting beat up playing for a team that I don't want to play for? That's stupid," Walker said.

Walker, who underwent surgery Oct. 7 in Houston, says his rehab at Florida State (his alma mater) is going as planned. He's sprinting and should be ready to go by training camp -- for some other team, he hopes.

"I love the game," Walker said. "But I'm not going to risk what I went through this year, tearing an ACL and taking pain pills. If I'm going to go out and take hits, it's going to be for a team that I love playing for."

Walker said he told McCarthy, "It's nothing against you or your staff, but it's unfair to you to have a player in your organization that doesn't want to be there."

"I'm not going to grandstand," Walker said. "I just want the Packers to give me peace of mind."