SEOUL, South Korea -- Super Bowl MVP Hines Ward was nervous for the first time in his life as he prepared for a trip to the
land of his birth. He also looked forward to learning more about
his heritage. 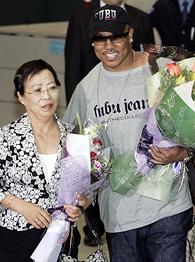 "I'm proud to be a Korean, that's something when I was little as a kid, I was ashamed of," Ward told a packed news conference room at the Seoul hotel where he was staying in a suite normally reserved for world leaders.

Ward was virtually unknown here before the Super Bowl because American football isn't widely followed in Korea. Since the Pittsburgh Steelers won and Ward was named MVP, he has become a media phenomenon in South Korea and drawn attention to the discrimination faced in this country by children of mixed parentage.

"The Korean community has supported my mother and I for the
first time in my life," Ward said at the news conference, carried
live by several TV channels.

Ward had lunch later Tuesday with President Roh Moo-hyun,
presenting him with an autographed ball, cap and jersey. Roh gamely
tossed the ball to Ward before the meal at the presidential Blue
House.

"You came back a hero," Roh said. "Children growing up in
South Korea can have big dreams by watching Hines Ward."

During his 10-day trip, he will be granted honorary
citizenship by the city of Seoul and be greeted at a reception
hosted by the U.S. Embassy.

He will also meet with children of mixed backgrounds. Ward was born in Seoul to a Korean mother, and his father was an African-American soldier.

The family returned to the United States while Ward was a baby and his parents soon divorced. His mother, Kim Young-hee, was initially ruled unfit to keep her son, but he ran away to live with her in second grade. She worked three jobs to support him, a story that has drawn sympathy from hard-working Koreans.

With Ward in mind, many South Koreans have said it is time
to tackle the discrimination that mixed-race children face.

Due to a strict family registry system, a traditionally
closed society and a history of leaders speaking of the pride
of pure Korean blood, mixed race children often say they find
themselves ostracized in South Korean society.

The number of such children is growing as more farmers and
fisherman find brides from other parts of Asia -- mostly China
and Vietnam -- as local women shun lives in rural areas.

During his stay, Ward will visit the Pearl S. Buck
International group, which helps mixed-race children.

"Hines Ward's visit will help shine a ray of hope for
mixed-race children," said Lee Ji-young of the group.

This is his first trip as an adult to South Korea.

"I'm very intrigued with the Korean heritage. It's something
that I missed out for 30 years of my life," Ward said.

He said his mother taught him that race wasn't important, and
called for understanding among people of all backgrounds.

"You can learn a lot from someone else's culture," Ward said.
"If two people love each other, then love has no color."

Ward and his mother were greeted by a scrum
of more than 100 reporters and photographers on arrival at
Inchon airport, near Seoul. National broadcaster YTN carried
the arrival live and called the event "the return of the hero".

One automaker is loaning his entourage three limousines. A
Seoul hotel is providing one of its most expensive suites and a
fashion house has given new clothes.

"He [Ward] showed perseverance, resilience and modesty, the
core characteristics of the Korean people, and gave pride to
all Koreans at home and abroad," the Seoul city government said
in a statement announcing it will grant Ward honorary
citizenship.