Football? Well, that's the big question the Green Bay Packers quarterback still can't answer. Not when he isn't sure if he wants
to risk another losing season, and he wonders whether his team
improved enough this offseason to justify coming back for one more
year. 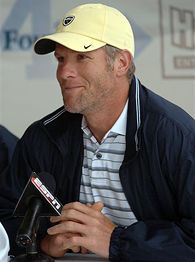 "I'd like to say I think we are better, but I don't know if we are," Favre said Saturday at his charity golf tournament. "I
don't make those decisions, never asked to. ... I know when we
signed Reggie White [in 1993], we knew we were going to be better
right away.

"We have to make a statement again," he added.

He insisted he has not made up his mind, is not withholding his
decision and will notify the Packers once it is reached.

There was widespread speculation that, finally, that time had arrived. Favre called a news conference, as he does every year, at the site of his golf tournament -- this year, at a casino in the
Mississippi Delta some 400 miles across the state from his hometown of Kiln. A spokeswoman for his family said a "scoop" was expected.

Instead, Favre spent about 15 minutes discussing his indecision -- and his golf game.

"The fact that we're sitting here today at this press
conference, to me, is a joke because I don't have anything to tell
you," Favre said. "Somebody assumed that I would."

Favre is concerned about possibly ending his otherwise brilliant career with back-to-back losing seasons. Last year, he threw a career-high 29 interceptions and failed to throw for more than 20 touchdowns for only the second time since 1993, and the Packers finished 4-12 for their first losing season since he joined the
team in 1992.

"I guess, ultimately, it comes down to just whether or not you want to play and run the risk of being 4-12 again," Favre said. "There's always that risk, and the chance of us being 12-4. I
would probably be more surprised if we were 12-4.

"Anything can happen, but I never thought we'd ever go 4-12 in
my tenure at Green Bay," he added. "That's something that I'll
have to live with, if I'm willing to go through that again."

The quarterback from Southern Mississippi ranks second behind Dan Marino on the NFL's career list in touchdown passes (396), yards passing (53,615) and completions (4,678). He holds the NFL record for most consecutive starts for a quarterback with 221 (241 including the playoffs).

Favre has led the Packers to six division crowns, restoring success to one of the NFL's most famous franchises. The Packers won the 1997 Super Bowl in New Orleans, a 35-21 victory over New England, returning the Lombardi Trophy to Green Bay for the first time in 29 years.

"When I left after the season, yeah, it was tough to be excited about football. But it's in my blood," Favre said.

Questions surround the team's offensive line, which struggled last season after the departure of stalwart guards Mike Wahle and Marco Rivera to free agency. Favre wants to make sure the Packers are going to be competitive again.

"I don't know on paper if we're better or not," Favre said.

Also, there are concerns about Favre's family, which in the past 2½ years has endured one trying situation after another.

His father died in December 2003. His wife, Deanna, survived breast cancer and mourned the death of her brother in an
all-terrain vehicle accident. Several members of Favre's family in
Mississippi were displaced because of Hurricane Katrina.

Favre threw for 399 yards and four touchdowns against the Oakland Raiders one day after his father's death.

"There are other things to do and focus on right now [besides football]," Favre said, referring to his charity. "And I say do that, because that's what I'm trying to do. I want to make the
right decision, but I have other things on my plate as well."