MISSISSAUGA, Ontario -- Ricky Williams is hard at work in
the CFL.

Clad in shoulder pads, shorts and a blue practice jersey with
his new No. 27, the suspended Miami Dolphins running back appeared
to be in great shape Monday during his first practice with the
Toronto Argonauts. 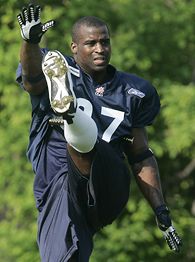 Williams was suspended by the NFL for the entire 2006 season
following a fourth positive drug test. But the Dolphins gave him
permission to play this year in the CFL, and he signed with Toronto
on Sunday.

"I made it. I survived, so I guess I'm OK," Williams said.
"From my perspective, it's the same practice that I've had since I
was a kid. It's football practice.

"As far as talent ... the talent here is comparable to the NFL,
it's just consistency. From what I saw out there, these guys can
run, these guys can hit, these guys know what they're doing.
Football is football. There are a couple of differences in the game
but for the most part it's just terminology."

The 5-foot-10, 220-pound Williams rushed for 743 yards (4.4
yards per carry) in 12 games for Miami last year after missing the
first four games following his third positive drug test. Williams,
who turned 29 recently, has surpassed 1,000 rushing yards four
times in the NFL, including a league-high 1,852 yards in 2002 with
Miami.

"He looked good," Argos quarterback Damon Allen said. "Today
was his first day and he was able to pick up a lot of things. I
found you didn't have to tell him stuff, which shows he's football
smart."

"It's a part of my game that I haven't been able to do a lot in
the NFL," Williams said. "But I'm excited. I think it will make
me a better all-around player, definitely."

"Ricky can catch the football," Allen said. "He has the
ability to move his body and adapt and catch the ball. I think it
will give another dimension to his game because everyone thinks
he's just a running back."