TORONTO -- Ricky Williams needed a little time to get going in his CFL debut. 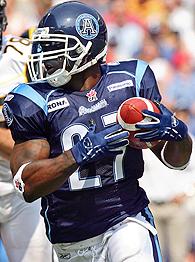 After gaining 8 yards in the first half, the former Dolphins running back finished with 97 yards on 18 carries in the Toronto Argonauts' 27-17 win over the Hamilton Tiger-Cats on Saturday in the regular-season opener for both teams.

Spergon Wynn replaced injured quarterback Damon Allen after the third play of the game when Allen went down with a broken middle finger on his right hand. But Toronto stuck with its pass-first gameplan even though it had Williams in the backfield.

The Argos, especially in the first half, seemed content to use Williams as a decoy rather than a ball carrier. The former Heisman Trophy winner had three carries, and two catches for 24 yards in the half.

Williams was especially impressive in the fourth quarter, with
Toronto protecting a 24-17 lead. He had 11 carries for 72 yards,
including a 35-yard run after rookie Jermaine Mays' interception
put the Argos at their 20-yard line.

"I think we saw what can happen with you [if] continue to stay with
him," coach Mike (Pinball) Clemons said. "As the defense wears
down, those tackles at the beginning of the game start to become
arm tackles and he did a good job of running through those."

Williams is playing in the CFL after he was suspended by the NFL for one year after a fourth violation of the league's drug policy. He rushed for 53
yards on 15 carries in Toronto's two exhibition losses to Hamilton.

Hamilton coach Greg Marshall was unhappy when Toronto gave Williams the ball twice from the Ticats 6-yard line in the closing seconds, attempting to get him a touchdown and 100 yards rushing.

"Would you give it to your star back with 5 seconds left?" Marshall fumed. "It doesn't matter, our job is to defend and they can do what they want to do."

"I think they just wanted to get me over 100 yards and get me a touchdown," he said. "They were just trying to make my debut just a little bit nicer."

"When you lose you find things to get [upset] about. Seriously, it's not a big deal. Who cares about 100 yards? We won, that's what's important."

Even though he played in the NFL, Williams isn't expecting to
take the CFL by storm.

"I didn't come up here saying these guys are slower or aren't
good players," he said. "I have respect for anyone who puts on a
football uniform."

"This game is difficult and at any level of professional
football you have to be an athlete. You guys might see me as a big
football player from the NFL coming here but for me I approach my
job more seriously here than I probably did in the NFL. You have to
get yourself ready to play, regardless of who you're playing
against."