According to his wife, Lydia, Manley was hospitalized June 16 after police found him "disoriented" in northeast Washington. She said a CT scan showed an enlarged colloid cyst that was collecting fluid and causing increased intracranial pressure. Doctors recommended surgery, and Manley, 48, is now resting in the intensive care unit at Georgetown University Hospital. 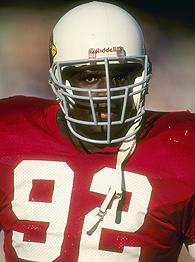 His prognosis is for a relatively full recovery, although doctors have told his wife that memory loss is a common side effect of the operation. When asked this weekend to recall his jersey number with the Redskins, Manley answered, "7272," and he also confused the names of some of his closer friends.

"I guess that's what the doctors were talking about," Lydia Manley said. "But he was asked where he was born, and he was right, he said, 'Houston.' The nurse said, 'Oh, you're a Longhorn,' and he said, 'Yes.' He's not confused. He's fine; he's blessed. He might be a little off, but not that far off. He's OK."

Manley, who is 6-foot-3 and about 260 pounds, is expected to be hospitalized for at least another week. "I don't feel too good," he said over the telephone. "My head hurts, I'm cold a little bit. When I drink water, I get a little cold. They've been poking me all day. Needles and needles and needles."

Manley, who was banned from the NFL in 1991 for repeated cocaine abuse, had known about his colloid cyst for 20 years. He had collapsed inside a Georgetown department store in April 1986 after an all-night drug spree, and doctors found the cyst after performing a routine CT scan in the emergency room. Surgery, at the time, could have been career-ending, but, according to Lydia, several doctors told Manley that the cyst was only the size of a nickel and that he could continue playing. They recommended a CT scan every six months to monitor the cyst's growth, but Manley stopped getting checked in 1994 when he left the Washington area and moved to Houston.

He moved back to Washington 20 months ago to give drug awareness speeches, but recently his health became suspect. According to Lydia Manley, her husband was having repeated headaches, was feeling fatigued while driving and was acting clumsy.

"Well, he doesn't complain," she said, "but he was getting headaches, and he was taking a lot of ibuprofen. He'd buy bottles and about a week later, he'd say to me, 'I need another bottle.' I was like, 'Dexter, what happened to the bottle you had before?' And he'd say, 'Oh, I took that already. I'm done with those.' I asked, 'Why you taking so many?' He said it was from working out. But that's not what it was.

"He's always gotten sleepy, but not usually behind the wheel. But now he was starting to get sleepy behind the wheel, and he'd say a lot, 'I'm going to go get off my feet.' And I'd say, 'You haven't been on your feet. Why you tired?' He'd always feel like he had to get off his feet.

"And he would walk like a little old man sometimes. He'd act like it was a joke, like he was doing it to be funny, but it was probably because his head was in pain. And every now and then, he would knock over things on the table with his hand, and I just thought it was like him being the bull in the china shop. But it was real involuntary. He'd be kind of embarrassed, and he'd say, 'I don't know what happened.' So I think all those things were like the symptoms."

It escalated to the point that Manley appeared "disoriented" just over a week ago, while trying to tell police that his car had been robbed. The officers called for an ambulance, and an ensuing CT scan showed that his original colloid cyst was now the size of a quarter. According to Lydia Manley, her husband was also experiencing obstructive hydrocephalus, which, in layman's terms, is "water on the brain." She said that fluid had been collecting in the cyst, and that the cyst was pressing on one of his ventricles.

Colloid cysts can be hereditary, and Manley's mother, Jewellean, once had surgery herself to remove several brain tumors. Manley, as a result, was outwardly emotional before his own surgery, and made it a point to call his three children, including his son Dexter II, who will be a junior defensive end/linebacker at the University of Oregon this fall.

Tom Friend is a senior writer at ESPN The Magazine.