SANTA CLARA, Calif. -- John Brodie thinks his old No. 12
jersey will be a perfect fit on Trent Dilfer with the San Francisco
49ers. 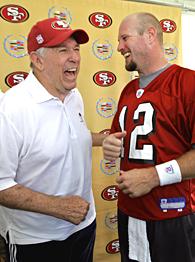 Brodie's jersey was unofficially unretired on Friday after the
49ers' first practice of training camp. The longtime San Francisco
quarterback, who still has trouble speaking after a stroke nearly
six years ago, grinned and laughed as he ceded the number to
Dilfer, his longtime friend and golfing buddy.

Dilfer chose the number as a tribute to the 1970 NFL MVP, who
made two Pro Bowls while playing in his native San Francisco from
1957-73. Dilfer also hopes the gesture will get the attention of
the veterans committee that could elect Brodie to the Pro Football
Hall of Fame.

"It's probably the biggest honor of my career to this point,"
said Dilfer, who led Baltimore to a Super Bowl victory in 2001.
"J.B. has been one of the biggest influences on my career. As soon
as I got traded, it wasn't five minutes when I called and asked if
he would be honored by this."

Brodie, who will turn 71 next month, still is recovering from a
serious stroke in October 2000, but the excitement on his face made
his feelings clear.

The 49ers acquired Dilfer in an offseason trade with Cleveland
to land a reliable veteran backup for Alex Smith. When the Northern
California native heard he was coming home, Dilfer hatched a plan
to wear his hero's number -- and Brodie readily agreed.

"It certainly says something about John that he does that,"
said coach Mike Nolan -- whose father, Dick, was the 49ers' coach
during Brodie's final six NFL seasons. "Trent is a guy that has a
tremendous amount of respect for the old-school guys, and that says
a lot to me, too."

Dilfer and Brodie met through former NFL quarterback Chris
Chandler, who is Dilfer's friend and Brodie's son-in-law. The
quarterbacks soon struck up a friendship through golf and common
football experiences.

Though San Francisco struggled through much of his early career,
Brodie led the 49ers to the NFC championship game in 1970 -- their
final game in old Kezar Stadium -- and 1971, their first season in
Candlestick. Nolan remembers watching Brodie during his playing
days, including particular passes to Gene Washington, the four-time
Pro Bowl receiver who's now a league executive.

After his NFL career, Brodie became an excellent competitive
golfer during 15 years on the Senior Tour, even winning the 1991
Security Pacific Senior Classic. Dilfer and Brodie still golf
regularly, and the younger quarterback praised his mentor's
competitive nature, even after all these years.

"I really believe John should be in the Hall of Fame, and
hopefully this will create some awareness of his career and how
spectacular it was," Dilfer said.

Though the 34-year-old Dilfer is Smith's backup, he remains
eager to play. He is particularly pleased to be in offensive
coordinator Norv Turner's West Coast offense for the first time.

"I love this system," Dilfer said. "This is the system that
I've always wanted to be a part of."