ALBANY, N.Y. -- Coming this fall to an NFL stadium near you: fashion-forward referees.

Gone are the traditional vertical black-and-white stripes that have been a staple of the league seemingly since its inception and that live on in Foot Locker stores and DJ booths around the country. 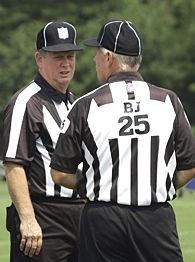 In their place is a flashier look that features wide white stripes and thin black stripes that flare around the shoulders and upper arms.

In addition to giving their annual lecture on rules changes for the upcoming NFL season, several referees debuted the new threads this week at New York Giants training camp.

Not everyone was enamored of the new look.

"They should be riding on a horse at Saratoga," one spectator cracked Thursday while watching the officials oversee a practice session.

Making a fashion statement was not the primary motivation behind the decision to make the change, NFL spokesman Greg Aiello said. First was the desire for a lightweight, more efficient fabric that would be cooler in hot weather and warmer in cold weather.

"The material of our shirts was very heavy, so everybody wanted a different material," said Walt Coleman, an NFL referee with 18 years' experience. "Everybody loves the material, and the shirts are really comfortable. I think everybody's just not totally sold on the style. My son said to me, 'I can't believe you're changing your shirts!'"

The second aim was to make the uniforms more easily accommodate the gear referees need to carry, Aiello said, which includes more layers of clothing in colder weather.

"The biggest reason we changed was to upgrade the performance quality of the uniform," he said. "The third reason was to give the uniforms a more modern, updated, distinctly NFL look."

Referees will wear the new Reebok-designed shirts and the traditional white knickers for most games and will switch in cold weather to black full-length pants that will allow more room for additional layers.

Aiello wasn't sure when the league switched to the vertical stripes but noted that NFL referees in the 1930s wore "solid white dress shirts with bow ties and beanies."

When asked his opinion of the new uniforms and whether he would have an easier time locating referees during games for a little spirited exchange of ideas, Giants coach Tom Coughlin replied, "Are you kidding? I'm just glad to have them out there. And I've usually been able to find them pretty well."