IRVING, Texas -- Terrell Owens has finally pushed the
Dallas Cowboys too far, drawing a $9,500 fine for missing a team meeting
and a rehabilitation session and being late to an offensive
meeting, The Dallas Morning News reported Sunday. 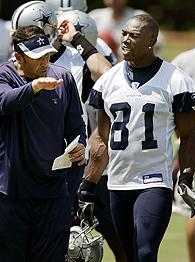 At a Monday news conference, coach Bill Parcells refused to acknowledge that Owens had been fined.

"I didn't announce that," Parcells said of the fine. "We keep this in-house."
Asked repeatedly about Owens' situation, Parcells wouldn't acknowledge whether a fine had been levied.

"This conversation's going nowhere," he said. "...Whatever opinions anyone else has is totally irrelevant. I'm operating from a position of advantage."

Asked if Owens had been a "problem," Parcells said, "He hasn't been a problem at all."

The incidents occurred Friday, the team's final day preparing
for a preseason game against San Francisco. The Cowboys beat the
49ers 17-7, making them 3-0 this preseason without Owens playing
any of the games because of a hamstring injury that's also kept him
out of 19 of 31 practices since the start of training camp.

During a postgame television interview, Jones did not mention
the fine but answered several other questions about Owens. Jones
said his only concern with the receiver is "injury, not all this
other stuff you hear about."

Owens' past is filled with run-ins with quarterbacks, coaches
and others in his own organization. San Francisco and Philadelphia
got rid of him, but the Cowboys welcomed him with open arms and a
lucrative contract in March, four days after the Eagles released
him.

Owens vowed to be a better man and a better teammate in Dallas.
While the fine is the most drastic, he already has done plenty to
stand out.

He missed much of the offseason training program -- with
permission -- and turned his hamstring injury into an
attention-getter by flying in specialists to help him rehabilitate
and wearing a cycling team outfit one day while pedaling a
stationary bicycle.

After returning to practice for several days, Parcells ruled him out of a Monday night game and Owens hasn't
practiced since. He said he aggravated the injury because the club
pushed him too hard. When Parcells said this week that he needs to
see Owens on the field, T.O. responded that there's 10 years of
tape to show what he can do.

Jones seemed to downplay the drama surrounding Owens' injury by
noting that Carolina's Steve Smith and Pittsburgh's Hines Ward also
have been slowed by hamstring injuries without drawing the same
scrutiny as Owens. He also recalled Deion Sanders' ability to play
well after flying in from baseball games and missing long stretches
of practice.

"I know this -- when he's healthy, he's going to help us win
these ballgames," Jones said.

The Cowboys play their final preseason game Thursday night at
home against Minnesota. The opener is Sept. 10 at Jacksonville.