CHARLOTTE, N.C. -- Greg Good, the Carolina Panthers fan who dresses up as "Catman" at home games, will receive a new pickup truck from Fox Sports after an on-air practical joke during a preseason game went awry. 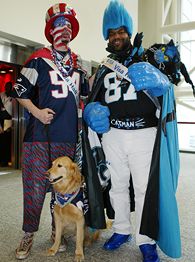 During the second half of the Aug. 24 game between the Panthers and Miami Dolphins, Fox Sports announcers Dick Stockton and Daryl
Johnston started billing a car giveaway as a reason for fans to
stay tuned after the teams' starters left the game.

"Now all you fans out there, you might be thinking, 'Well, the
starting units are out, we might change the channel.' We're going
to do something special to try and keep you here tonight. We're
giving a car away tonight," Johnston told viewers.

With 1:56 remaining, the telecast went to a shot of sideline
reporter Tony Siragusa standing in front of the 6-foot-4, 340-pound
Good, who was sitting in a front-row end zone seat wearing an
electric blue wig and black-and-blue cape.

"The car is coming in right now," Siragusa said. "Here it
comes. Beautiful. It's white. It's a Porsche."

He then handed a toy car to Good.

Good says he believed the toy was a token of the real car he was
to receive and expressed excitement and joy. That turned to anger
after Good, who counsels troubled youths, found out it had all been
a joke.

That led Fox Sports chairman David Hill to announce he would
personally give Good the keys to a new Ford F-150 pickup.

"I'm coming to Charlotte Friday to apologize to Mr. Good for a
joke that went terribly, terribly wrong," Hill said.

Hill said there would be punishments at Fox Sports over the
incident, but said none of the announcers involved will be taken
off the air.

"I take the reputation of Fox Sports very seriously and I don't
want it to be sullied," he said.

Good expressed excitement at the turn his story had taken.

"I'm so surprised and so happy," he told The Observer. "I thought all I was going to get was an apology."