TAMPA, Fla. -- It seems like everyone has some advice these
days for the winless Tampa Bay Buccaneers and struggling
quarterback Chris Simms. 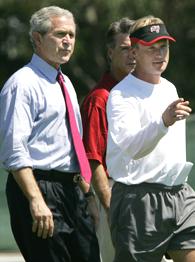 Even President Bush tossed the football with the former
University of Texas quarterback Thursday, and offered some advice.

"Never give up," Bush said Thursday when asked what he told
the Bucs during a half-hour visit to the team's training facility
near Raymond James Stadium, where the president delivered a
fundraising speech to about 400 people in a VIP club area.

Coach Jon Gruden wouldn't disclose what additional wisdom the
president might have imparted to Simms.

"It's great, though, to get some advice from the president of
the United States. It's a little different when the coach is
telling you to do this or do that. You have the president come and
give you some advice, that's something you gotta listen to,"
Gruden said.

"Hopefully it works. If it doesn't work out this week, he can
call the president to see what happened."

Bush accepted an invitation to stop by practice and was greeted
on the field by Simms and teammates Derrick Brooks, Ronde Barber
and Mike Alstott and Ryan Nece, as well as an appreciative Gruden.

"The president has a lot to do. For him to show up here with
the SWAT team on the roof and the Secret Service guys, that's
awesome," Gruden said.

The Bucs (0-2) are preparing for Sunday's game against Carolina,
another winless team. Simms has been the target of criticism
following subpar performances the first two weeks of the season.

Bush addressed the entire squad, coaching staff and other team
officials and personnel in the middle of the field. The president
mingled with players, coaches and officials, posing for pictures
and signing autographs before playing catch with Simms, son of New York Giants Super Bowl-winning quarterback Phil Simms.